Heartaches And Hot Problems. Justine and the Unclean 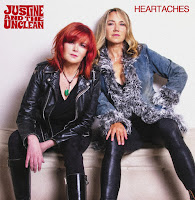 Just a few weeks ago, I wrote about the new single of Justine and the Unclean. I simply loved the song but also wondered whether more than a couple of songs would be just as much fun. The answer is there in the form a mini album called Heartaches And Hot Problems.

Without a doubt the flagship of the album is that single, 'This System Is Set To Self Destruct'. There's no need for a lot of thought there. So read on here should you wish to know more: http://wonomagazine.blogspot.com/2018/10/this-system-is-set-to-self-destruct.html.

'Heartache Knows Your Name' is another one of those fine punked up rock songs. Justine Covault sneers her lyrics in a delightful way. She's showing what she thinks of this heartache causing example of a human being alright. Behind her the bass - drums tandem is as tight as can be, supported by the rhythm guitar. Over it all the lead guitar of Charles Hansen handles duties in an extremely competent way. Someone not paying attention may even think it's still the same song. Again the melody is one so easy to sing to. Another hit in that parallel universe of mine.

Things do not remain at that level but then not much over all does in this genre. Perfection is something which is out of reach for most and Justine and the Unclean has touched base there twice already.

Not all songs that follow have the same amount of energy. Which is probably as well for band and audience. Yes. (It's impossible to be monosyllabic as a reviewer. Especially when in 'Be Your Own Reason' the speed returns, as does the obvious joy this band is spreading.) 'Monosyllabic Man' is a song that would have looked great on Blondie's 'Eat To The Beat' but not on 'Plastic Letters'. That tells a lot in my book.

Justine and the Unclean has the right attitude. The band rocks as loud as it should playing this music, without losing a decibel on the melody. The members have reached an age where insight into the twists and turns in life are recognised more easily and anger isn't the main feature any longer. With age the two sides to a story are a part of life. Not necessarily easier, but a part for sure. This results in the fact that in the music of this band sheer fun shows through no matter how tough the songs and lyrics may be. It shows in the melodies, the harmonies and the melancholy in that final song 'Love Doesn't Know A Thing', which can almost be called a ballad. The mood and the speed have gone down and the album is lifted to another level. Justine and co-singer Janet Egan King (also the bass player) harmonise near perfectly (everywhere). Sounding like many of the female fronted punk rock bands of this decade, yet outplaying and singing them all. I haven't heard a better punk rock band this decade fronted by two ladies (so far. The rest needs to catch up fast). 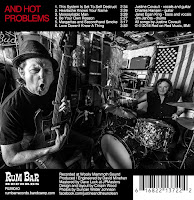 So one song was a dead give away after all. Heartaches And Hot Problems is a near perfect mini album. There's nothing to it than banging those heads and shaking them fists, but with only one goal in mind: to sing along as load as possible. Justine and the Unclean should be able to let every venue it travels to explode. Many times over. With Heartaches And Hot Problems it has five great songs to its name and a sixth that is more than alright. Promise delivered and more!


You can listen to and buy Heartaches And Hot Problems here: