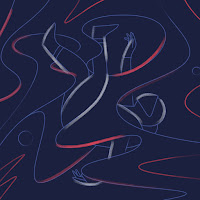 Vacancy At NASA is not your ordinary run of the mill sort of album title. It suggests a career in science although NASA undoubtedly also needs secretaries and canteen aids as well. What Adam Barnes' relation to NASA is I don't know. I do know a little about his album though. Putting on the album means I enter the world of a singer-songwriter with a fairly high voice and a serious demeanour.

The album opens with 'Bad Luck'. A song with just an electric guitar and a little extra, more classical strings on the side here and there. It sets a level but also an expectation. When 'Ordinary' enters with a drums, bass and a lead guitar over the acoustic one strumming away I am somewhat surprised as it was not what I expected to follow 'Bad Luck'.

It does appear to be an odd one out. In 'Everything' the acoustic guitar is accompanied by strings. Producer Sam Winfield, who plays keys and programmed the drums, has a big share in the sound of Vacancy At NASA. He is responsible for dressing things up. He has done so with delicacy and taste putting accents to enforce Adam Barnes' voice in the right places.

Although this album is my introduction to Adam Barnes, Vacancy At NASA is his fourth release. Two albums and an EP preceded it since 2011. This is his first album since 2015 with single song single releases since the summer of 2017.

In his singing and melodies Barnes lays an effect that can only be described as emo. I can effortlessly place his singing on a band like Panic! At The Disco or My Chemical Romance. "You have been following me like a smoke signal"? Put some loudly played music underneath it and bingo!

This is only a modest part of what makes up Vacancy At NASA. Adam Barnes plays his slow to mid tempo songs with modesty. He dares to let the listener discover the strength of his songs without overdoing things in any way. 'Electron' gets all sorts of horns, keys and strings attached to it, yet somehow it remains the song by a man with his guitar. Sam Winfield never overdoes things.

'Lonely Navigator' starts with just strings, but soon gives away its secret: The album title is explained, with humour in the lyrics, with all the solemn sounds around it. A song where all the original music may have been stripped away to create something very new, with just a few piano chords beneath the strings and voice.

What does this album remind me of, you might ask? The recent album of Novo Amor with Ed Tullett. In a more modest way it reminds of a band from San Francisco who's name just eludes me right now. (Blind Willies) Or John Smith reviewed here last summer.

Listening deeper into the album it seems Vacancy At NASA becomes more intense. Either it truly does or the mood of the album gets to me. And it seems to me that is the only way to truly appreciate this album. Adam Barnes releases an album that begs listening and attention. Without it Vacancy At NASA does not stand a chance in this modern world. In that it is a very old-fashioned album. Like the albums of my youth it wants the listener to truly listen. I did, several times and yes, it grows on me slowly. One of the most beautiful songs on the album 'Broken' is only revealed through perseverance. Here's is where the Jeff Buckley influence comes through more.

As a whole Vacancy At NASA has not completely convinced me yet. For that Adam Barnes may be the one recent singer-songwriter too many for me. Having said that, this album has its moments and Barnes' voice is extremely pleasant to listen to. The album does not offend in any way and perhaps I would have like it to have done so here and there. Just this hint of danger in a few songs could have made a difference. 'Better Off Without' is the closest Barnes comes to this, with strings none the less.

For now this is what I have to make do with and without hesitation I recommend this album to those who like beautiful singing with modest accompaniment that brings out the voice best.

You can listen to and buy Vacancy At NASA here on Bandcamp: