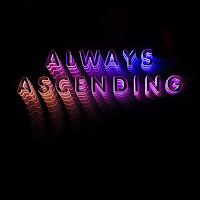 Listening to 'Franz Ferdinand' for the first time was a mindblowing experience. I remember sitting on a stool at my local recorddealer and listening to the start of 'Jacqueline'. When the tempo change kicked in after the slow intro I had to hold on for dear life. What a song! What strength! Simply perfect and it only got better. Franz Ferdinand since always delivered, with a fine album in 2013 including one of its best songs ever 'Bullit'.

After working with Sparks on the 'FFS' collaborative album, which I thought only partly successful, Franz Ferdinand is back, but not unscathed. Co-writer and guitarist/keyboardist Nick McCarthy left the band and is replaced by two new musicians, Dino Bardot on guitar and Julian Corie on keys and guitar. Has this changed the band in any way? It is impossible to say really, as there isn't a new album made with Nick McCarthy. Yet there is a fair difference. The exuberance that characterised Franz Ferdinand has mostly left the band. Being 40 something could be another reason for that of course. Settling down and stuff.

Reading on the album before hearing the music, except the first single and title track, I had expected to hear disco music. That Always Ascending certainly is not. The title track is though. A modern form of disco rages in my ears, without abusing them for a second. Always Ascending was preceded by 'Demogogue' as part of the 30 Days 50 Songs program surrounding now president Trump's candidacy' that did not make it onto the album. The statement against things Trump did not fit the whole of the album. Which is a sort of shame, as now there for ever is a song that just floats out there. 'Demagogue' is a song with a weird little twist in the rhythm that puts me on the wrong foot the whole time. In that it may not fit the rest, as this definitely does not upset my sense of rhythm in any way. Well, most songs do not.

The album opens with 'Always Ascending'. I'll admit having had to get used to the song, but by now I'm totally convinced. The quiet beginning, in stark contrast with the dancy second part, does all what it is supposed to do. Yes, as such it reminds me a little of 'Jacqueline'. Though a much subtler song, the 'Take Me Out' factor is clearly present here. The central musical approach of this album is already showing in its most danceable song. There is a mix of extremely poppy moments, easy to dance and sing to, and harder to understand parts that derange the atmosphere and make the song harder to get.  In 'Always Ascending' there are two of these extremely poppy moments, creating even more confusion. When things have settled down, the thought of a great party song remains. So very well done, Franz Ferdinand.

The surprise of Always Ascending is that Franz Ferdinand is less exuberant than ever before. Without seeming to lose that expressiveness that always are a part of its songs. 'Paper Cages' is such a song. Fairly easy going, yet perfectly structured. Others are not easy songs to digest, so it is hard to tell where I in the end will wind up with this album. That was far easier to predict with the four previous albums. Every time I play Always Ascending I notice these delicate pieces that make me prick up my ears and start to listen. If that is not a sign that things will be alright in the end, what is? That makes this album very different, as all that went before was far more one dimensional -in the best possible way.

On the other hand I find myself having trouble to truly bond with Always Ascending. There is something in this music that keeps me away from it. Circling around it, yes, grasping it fully, no. For that the album is too complex and has a tendency to put me on the wrong foot a lot. That makes this album harder to instantly like. This appreciation may change though. There's nothing keeping me from buying the new Franz Ferdinand and playing it again and again, I'm sure. (And going to the show in Groningen next month.) Always Ascending seems to have all the ingredients for making this album a triumph through growth. Growth by play. Time will really tell, but I am full of confidence in this case.

Let me finish with the artwork. This is going to be so beautiful as an LP. Art it is and on 10-02 mine.

You can listen to 'Always Ascending' here: