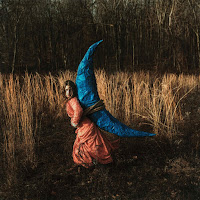 Holly Miranda is a musician from the U.S. who is releasing her fifth album, counting a self-recorded album from the early 00s. I am getting myself acquainted with her art through Mutual Horse. The album reminds a little of the icy atmospheres Christine Owman released on her record 'When On Fire' in 2016. The differences in music are plenty, yet the atmosphere on both albums can be found undercooled, with Owman winning the chill factor, should there ever be a contest.

Mutual Horse is an album that I comfortably shelve in the indie section with some pop influences. The music resonates safely in a mid-tempo range. The mood is lowish but certainly stable. Nothing strange happens. Although the album is not one that I would call agreeable. For that the music has these little hooks that can scathe a soft and delicate skin. Holly Miranda's voice is able to change between super soft when she sings in a higher register to dark when she sings deeper. Where the music is well worked out all the time but always subdued and melancholy. Experimental with jazzy horns in the background. The music can be patchy, like rough sketches can be. When drums come forward, things change fast. In this duet, 'Exquisite', Holly Miranda works together in duet with TV on the Radio's Kyp Malone. One of the songs that are firm, almost rocking.

All this makes Mutual Horse an album for the spring. The days get longer, the sun warmer, so I can take in a darker tinged album just a little better. In fact I am listening to the album right now and the winter sun comes out bright in the street in front of my window. I am listening to slow playing strings at the end of one song followed by an electronic intro with all sorts of organic details going on around it. (In fact the whole song, 'Towers', works around this basis.)

By now those looking for exuberance in songs know they have to start looking elsewhere. Fans of artists like Joan as Policewoman, perhaps even Sinead O'Connor, know they can proceed safely. In fact getting acquainted ought to be mandatory. In her music Miranda goes to a deeper level than just pop music. Although there are elements of pop woven into some of her songs, she is far too serious for her music to be called pop. There are some traces of Talk Talk to be found, like in the song 'Mr. Fongs'. Once my mind is seriously attuned to Mutual Horse, differences in the details, as just mentioned, do come out.

There is a downside to Mutual Horse. As a whole it is a bit too much for me. The album is 14 songs and around the 10th I notice that I have heard enough. The 11th is a surprising cover, 'When You're Lonely Heart Breaks'. I recognised the song immediately, but couldn't place it. Neil Young, 'Life', an album I haven't played since perhaps the 80s. Released just before my first Neil Young show that made me miss the famous Madjer goal. The cover makes me prick up my ears each time.

Despite the album making me appeal to my stamina, there's enough to enjoy on Mutual Horse. Holly Miranda's voice I truly like, as I appreciate all the details that are worked into the songs. Just listen to the twangy guitar in 'Mr. Fongs'. Despite so much electronic going on, the sparse guitar notes just jump out at me. Many songs have details like this, proving this artist was not happy with the basics but was in search of these fine extras. Those fine guitar melodies in 'Do You Recall' is another example. The use of horns give some of the songs a late night bar jazz flavour. Like they are the last song for the nighthawks at the diner. Cigarette smoke everywhere (impossible today of course), a lone spotlight catching it all.

The big surprise comes near the end when a sort of home recording comes by in the form of 'Gina', where a family is singing to go to the mountain. Holly Miranda goes instead to 'Mt. Hood' alone. Just her voice and an acoustic guitar start the song, before the rest joins in. Another slow and moody song with the ever so slight hint of optimism, perhaps against all odds, ends the album. Delicate and fragile 'Mt. Hood' brings Mutual Horse home, with a hint of Neil Young attached.

You can listen to and buy Mutual Horse here: