Kairos, January 2018 by .No on Concertzender 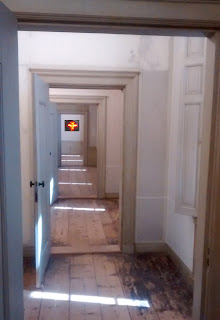 Once a month Concertzender broadcasts Kairos, a program made by .No. after the broadcast it is available on the Internet. Perhaps for eternity. And music is eternal as some of the music in this program shows. Somewhere after the broadcast Wo. turns to the Internet and listens to Kairos and expresses his thoughts, ideas, stories, associations and feeling that come with the music, because of the music and shares all that and more with you on this blog.

When the familiar notes starting each Kairos sound I realise there was something with this Kairos. Something of a new beginning, written in an email that I can't find. I remember being asked whether I could notice the difference. Well, let's try. I put the program back on and am off on this musical adventure.

Post rock is what this Kairos starts with. After having been exposed to Godspeed! You Black Emporer for something like 22 minutes a few months back and lived to tell (!), the three minutes of 'Static' is a piece of cake. "Atmospherics in the dark" Tom Robinson sang in the early 80s in his hit 'Listen To The Radio", I own a superb 12"single, and that is what I'm remembered of: atmospherics. 'Statics' is not music in the melodic sense but an experiment in sound and effects. It could be the background in a dark and morbid scene of a movie. Fairly impressive to be honest.

Ah, a Dutch dialect of a weather (or whiskey) worn voice and an acoustic guitar. Peter Clijssen returns to Kairos. An artist so obscure that Google doesn't even present a hit except for .... Kairos. Again I'm remembered of Ries de Vuijst and Broeder Dieleman. Clijssen certainly could play at festival with these two artists and totally fit. 'In Stilte' (in silence) is the right title for this song. Silence is what is presented next. Again atmospherics enter my ears accompanied by an electronically treated voice before the piano of Peter Broderick enters the whole. His touching of the keys is quite forceful, without overdoing it, certainly compared to all the sounds that lie underneath the piano. The piano plays the lead role, playing around a central motif on the bass notes. Just four notes that keep coming back while Broderick's right hand is exploring the room around these notes. There's enough of it to make 'Carried' very interesting to follow.

Slowly a choir enters the piano song. Broderick hammers on while the Choer Burgare Svetoslav Obretenov sings from a recording in the Sofia basilica. Orthordox Christian church music is not that much different from the liturgy sung in catholic churches I notice. This droning form of singing never attracted me. Besides that the singing in the orthodox church has a totally different function. The priest hardly participates in the celebration and is busy behind the scene. The singers entertain the audience for most of the time while the priest does his thing for the hail of the believers behind the curtain in his domain. So much for my experience in orthodox churches in Greece.

Low Roar was reviewed on this blog somewhere last year. The soft voiced singer Ryan Karazija accompanies himself on an acoustic guitar that he strums softly in a very staccato way. A piano meanders around the guitar. 'St. Eriksplan' is an ever so delicate song, touch it and it may fall apart.

House of Cosy Cushions is no newcomer to Kairos. In 'Charlotte Salomon' Richard Bolhuis and his friends explore a jazzy rhythm and a looped small piece of music with trumpets and atmosphere. The repetition creates a trancelike state in which the minor differences meander like a slow curving river through a landscape. Slowly the music seems to move towards a waterfall. The climax does not come though. Teasingly the song slowly fades into nothingness.

Jazz is here to stay. The Ignacy Jan Wiśniewski Trio retuns with a ten minute fragment of its composition 'Port'. It has a high piep knor level. Meaning nothing much happens except an eruption of percussion here and a bass note there. The piano is the most constant, evolving, at long lest, into a small six note sequence that is repeated over and over. Atmospherics, there is that word once again, play up in the background. A fourth instrument enters the whole, a horn of some sort. The contra bass is bowed adding to the change is the song. All is relative as things can fall away as sudden as they appeared. The musicians are improvising as they go is my guess, having made some arrangements to go. 10 minutes is long, but not really a problem. Things happen here. The improvisation on the piano takes over from the motif taking the song into another direction and atmosphere. When the bowed bass returns all else drops away. The mood gets darker while low notes are played.

The move into a song by Pechenga is almost unnoticed, except that the electric guitar does not fit the jazz of the Trio. Again it is a modest motif of a few guitar and keyboard notes that do all. This is sheer beauty of a very modest nature. Pechenga does almost nothing to reach perfection and touches that bar seemingly without effort. 'Gitaro' is a composition very much worth while listening to and soothing to the brain. Especially after 10 minutes of 'Port' that kept me on my toes the whole time. 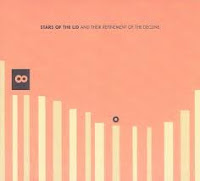 The move into 'Hiberner Toujours' is perfect once more. Strings enter the guitars and keys before they take over completely. The same sort of rest is exhumed by Adam Wiltzie & Brian McBride as they are by Minco Eggerman who takes over from the strings. His song 'Deda Ena' is a slow paced song where a violin is the lead instrument, melancholy and soothing. The trio songs work very well together and could have been one continuous song; with a little imagination.

The high voice of a lady is a pain to my ears in what happens next. Dominique Vellard sings fragments from 'Stabat Mater' but disappears as soon as she arrived. We move into a deep voice sequence from a John Tavener composition 'Primordial Call from ‘The Veil of the Temple’'. The how deep can a voice go contest is going on here offset by the high voice of boys, I think. There is that quality of the better church choir here to enjoy.

A piano takes over and my ears and mind are soothed once again. Sarah Rothenberg plays John Cage from the album Rothko Chapel. Slow, slow notes creep into my ears and move around there like little snakes trying to find their way to a place they can hide and stay. Notes escape from the soft playing. Single notes that are given a lot of prominence. Notes that upset the apple cart. Like sonic booms in a cloudless sky. Rothenberg plays them with joy, as if they are her treat to freedom within the bodice of Cage's composition. It all takes a little too long for me, yet I can hear the beauty in 'In A landscape'.

We end this month with a fragment of 'Falls Touching Grasses' by Taylor Deupree. The piano slowly gives way to sounds. This is not music in the traditional sense. This could be machines taped and clustered together with other sounds, drones and noises like a hiss. Over a minute into 'Falls Touching Grasses' it is not as I am going somewhere. Just hiss and loops and that is just not my cup of tea.

And that new beginning? It beats me. This is .No music with one little hint by

Listen to this Kairos here: