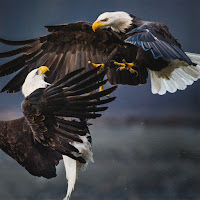 For those who like their pop a little bit heavier and a hint of alternative will find things to their liking with Vita Bergen's Retriever. Songs that invite to bond and do some singing along with or just to enjoy at leisure.

Vita Bergen uses big enough drums to be noticed and throws in a synth or two for a more poppy and commercial feel. The singing is with a more subdued, slightly rough voice with a typical accent. Think Mando Diao at the time of its big hit, 'Dance With Somebody'.


Vita Bergen is a Swedish band from Gothenburg that formed in 2010, to release its first album, Disconnection, in 2013. For Retriever the band went to Los Angeles to record it, with co-productional duties between its frontman William Hellström and Martin Forslund. Whether that made a huge difference, going all the way to L.A. I mean, I have no way of telling. Fact is that Retriever is a pleasantly forward moving album.

The music on Retriever is steeped deeply in the 80s. The synths could have been on the hitsingles of China Crisis, Orchestral Manoeuvres in the Dark and Howard Jones, just like the, at times, electronic rhythms. The music where the ultimate doom had mixed with the New Romantics and pop was allowed back into the music, without losing the credibility (of some). It is that light and shade that can be found on Retriever. The beat is dark and heavy, the synths and/or guitars sound light. The singing is somewhere in between both. Depending on the song.

That there is more to Vita Bergen is proven by 'Black Satellite', a dark, brooding rock song with ballad qualities. A song in which the band sounds a lot angrier than before this song. It does make me wonder who the real Vita Bergen is though, as the song is so different. It is also the final song of the eight song album. In nothing it is like the song that opens the album, single 'Nixon'. A song that is aimed for airplay. A lot like songs that I hear all over the place, so that it is in stiff competition with a whole host of U.S. and U.K. bands.

As an opener to Retriever 'Nixon' works well. It grabbed my attention instantly and invited me to keep listening. That brought me thanks to several pleasant detours to the dark finish. In between the album slowly moves from light to dark. The mood changes slowly where the band has obviously listened to bands like editors, The Killers ('Under The Sun'), Arcade Fire ('Brand New Day') and Imagine Dragons, before the 80s kick in. Sometimes it is overdone a bit too obvious, as in the song just mentioned, in others they find their own way quite well. I fact I really started to listen with 'Brand New Day', one of my favourites on Retriever, with its pulsing beat that drives the song on and on.

Those who like this music, know enough. Vita Bergen is versatile band with many a bend and twist, capable of surprising the listener in various, pleasant ways. It's time for me to go back in again. I think I've retrieved what I was looking for.

You can listen to 'J' here: