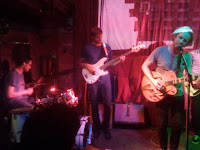 With a beautiful album under Maggie Brown's belt it must be a pleasure and a form of release to finally play the songs of the album to an audience. An audience made up of fans, family and close friends who cheered the band on and anticipated each and every move. All this happened on Saturday evening for Maggie Brown.

De Nieuwe Anita is an alternative bar and sort of restaurant just outside the city centre in what is the second ring of the city, if we discount all the famous canals, all rings in their own right, from when the city decided it was time to burst out of its Golden Age's boundaries. The venue excavated its cellar and built a small podium and dancing below street level. In what could have been a dungeon or four in another era.

On the back wall behind the podium the cover art of 'Another Place' was projected from several angles, including a more up close photograph revealing all sort of finer details. We were drinking beers with the most weird names, as they seem to suppose to have since a year or two, now that every street, like in the Middle Ages, has its own brewery. Some are even quite good and in all cases at least an experience.

Around 22.00 the band got on stage and opened with the instrumental song called 'Intro' that kicks off 'Another Place'. It was the beginning of a near perfect evening. Maggie Brown plays lovely popsongs that get a bite here and there. Certainly live a fierce beast can rise itself up to full length to lie down contentedly again after it made its roar heard for all. 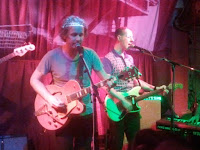 Yes, there were some nerves involved and a few minor mistakes. For me that shows that we are all human. If there are no mistakes, it probably isn't live but a tape. What matters is that the spirit of Another Place -and the album has a host of them- came alive on stage. That a song like 'Hail To The Rain' live is as impressive as it is on record. That all the intricate details sparkled on stage and the beautiful melody touched me immediately. If Maggie Brown ever produced a song that ought to go in heavy rotation on national radio, it is this one. So who's going to bring it to Giel Beelen's attention for them?

Marcel Hulst pointed out that the album title comes from a location near Liverpool. There were several pictures of the artwork 'Another Place' around De Nieuwe Anita. Watch out for an interview with Marcel on these pages soon, where he goes into this experience extensively. My girlfriend had seen an IDFA documentary on the site and from what I've seen and heard, I know a new vacation destiny some time soon. It has to be so impressive -and inspirational. A beautiful song rose from it and an inspirational album. I had the notion that if civilisation stopped all of a sudden and centuries later people land at 'Another Place' it will be an Easter Island experience, unexplainable, majestic, totally mysterious and alien. 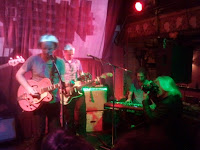 With drummer Pascal having to tame his snare drum for most of the time because of the resonance in the room, the sound sometimes did not help in the soft sequences. As if a ghost drummer was present. For the rest he was hitting away as soon as he could and obviously having the time of his life with the new songs he is quite clearly very proud of. The new bass player Thomas laid down some groovy melodies. Second guitarist Steven confided that he had rehearsed about nine times with the band and said "I know the songs better than the guys at this point". What I noticed is that he has found his own way into the songs, made them his own. All the music was there before he joined and it didn't show. Friso, I'm sorry, but the keyboard often could not be heard in the room from where I stood. And all over this the most beautiful melodies were sung by Marcel Hulst. Melodies that deserve a far wider audience that the several dozen present in De Nieuwe Anita.

There was only one complaint: 'Hummingbird' did not come by, but then a few songs from 'Maggie Brown' did, with a fantastic encore of 'Atlantic', which happens to be my favourite song from the previous album. So all was forgiven instantly, with only one thing left, to congratulate the band members in person with a beautiful new album and to go home with my copy on vinyl. 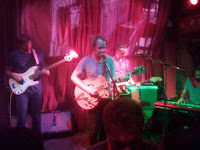 Immediately after the show 'Hair' by Zen kicked in at ear-splitting volume. Did I confide that 'Hey Jude' by The Beatles was my first self bought single in my review of 'Another Place' (you can read it here: http://wonomagazine.blogspot.nl/2017/06/another-place-maggie-brown.html) this evening allows me to reveal another fact: 'Hair' was my second single in the spring of 1969. Did any one say that coincidences exist?

It was the start of a Dancing that could have been staged somewhere in the 60s, with all sorts of obscure (instrumental) soul tracks. Almost every song I thought to sound familiar, without knowing who or what. 'The Beat Goes On' by Buddy Rich? Fantastically good and only Joost knows what else came by. We were dancing till the bus departure time told us to leave. Hot and sweaty.

It was a nice bonus, yet the main message remains that Maggie Brown has released an almost perfect album on 1 July 2017. If you're into perfect popsongs you better go and familiarise yourself with it.

You can listen to and buy 'Another Place' here: