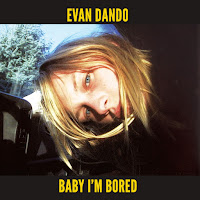 This June Fire Records re-released Evan Dando's last solo album too date. (Though two The Lemonheads followed this album. Since 2009 all is quiet.) Baby, I'm Bored passed me by at the time, as I sort of was never really caught by The Lemonheads at the time and stopped to follow the band. There were so much more interesting bands to follow. like .e.g., fellow Bostonians Buffalo Tom.

As I received the album I decided to take a listen. Although the album came to me in small waves, I did start to hear the beauty within. I also noticed that Dando's voice was starting to sound the worse for ware. Being only in his mid 30s, that is troubling if you're a singer.

What is not so hard to hear, is that Evan Dando is a fine songwriter. No matter how ramshackle the songs may be recorded, the flow of them in obvious. Even when estranging sounds are laid out over them, take a listen and you know exactly what I mean, the inner beauty of the compositions remain in the background or upfront, depending on the song. At times it is like all Dando's inner demons are parading like zombies over main street. Or he's so intoxicated that he has trouble to really hear what he has recorded, who can tell? Fact is there are some great songs on Baby, I'm Bored. He just doesn't seem to want a lot of people to know about them.

Baby, I'm Bored was Dando's first recording since 1996 and his first and only solo album. His production seems to have come all but to a halt in the past 20 years.

The re-release is a smart thing though. It shows a few things. Dando gets away with quite a few different sort of songs. Whether there is a more indie feel or moving towards alt.americana, Evan Dando stands his ground. A quality that several people may have forgotten all about and a new generation gets the chance to discover this exponent of the 1990 surge of east coast alternative rock bands. Always somewhat softer than Dinosaur Jr., the band that paved the way in Boston and Buffalo Tom, The Lemonheads infused just a little more pop into its music.

It is that quality that comes by on Baby, I'm Bored. This softer touch comes with Dando's voice. Even when the distorted guitars chime in, like in 'The Same Thing You Thought Hard About Is the Same Part I Can Live Without' (what's in a title), the voice comes in and the tambourine. That sound makes a lot of difference in the whole. A small rhythmic detail, having a great impact on the whole. It's details like this that make this album fun, even if it is the weird parts in some of the songs. Certainly when I get to cd 2 with the left overs and rarities. That moniker does right to some of the recordings. Probably never meant to be released, but good to hear anyway.

Is Baby, I'm Bored a brilliant album? No, that would be too much. It does make me wonder whether I have to go back into my backlog of 90s albums and see if I can hear now, what I could or did not then? Perhaps this is the album that helps me in.

You can listen to and buy Baby, I'm Bored here: