Bhava. The World of Dust 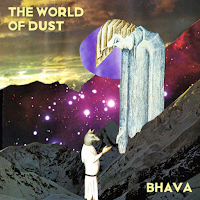 Recently I found this album on my digital doorstep. It is a re-release on Snowstar Records of Bhava that originally was released by Tiny Room Records and Snowstar in 2013. It certainly is an album that deserves extra attention.

The World of Dust is the solo project of Stefan Breuer, label owner, until last autumn bass player in I Am Oak, member of Lost Bear and many other projects.

That I had not heard of Bhava is not so strange. The pages of 3Voor12 Utrecht taught me that the album had been released as a book/cd in a print of 100. No streaming, release party, until earlier this month that is. (Read the interview and the impression of the previous release here: https://3voor12.vpro.nl/lokaal/utrecht/artikelen/overzicht/2014/januari/Stefan-Breuer-over-zijn-soloproject-The-World-of-Dust-.html)

There was some exclusivity involved, but I am the happier that Breuer decided to lift it. What comes by is an actual collage of music. There are so many ideas and directions that are explored on Bhava. They are followed through and brought to fruition in such a way that only two outcomes are likely: a) the listener runs off screaming, confused and over-excited by the different sensations he's been exposed to or b) he has followed every turn and twist and listened in awe. Now it is your guess in which category I place myself, but the fact that I'm writing gives away something.

It's not that Bhava is so different in mood, it is more that so many different influences come by. The way these are expressed really diverge, making the album as much an experience as just something to listen to. And next to that all the album alternates between instrumentals that balance between soundscapes and compositions and songs with vocals.

My first conclusion is that finally justice is done to open up this piece of art to the general public. There's so much to hear and truly listen to, to discover and digest, to familiarise with and appreciate that I can't understand the exclusiveness in the first place. Secondly, that Bhava is a piece of art, regardless of the art book. A record that is filled with gems that bring me back to the sort of experience I had when I discovered albums like 'Wish You Were Here' and 'Dark Side Of The Moon' or Yes albums in the mid 70s. No, I will not claim that Bhava is that good and not only because it is impossible to copy the experience of a teenager hearing "real" music for the first time. Production wise Bhava can not match the multi million budgets that went into those albums and, of course, that shows. Within those limitations things happen, art has been made possible to come to fruition.

What I will claim is that Bhava is good in its own right. The album takes the listener by the hand and leads him through all the different rooms in the building called Bhava. A building where nothing is what it seems and views change all the time. More a building in a magical forest full of surprises than a regular building. Kaleidoscopic, changing all the time, yet leaving the listener behind in total awe.

From a piece with classical arrangements to a light form of sympho to lo-fi folk compositions like I heard from Moon Moon Moon recently. In between are singers like Thijs Kuijken (I Am Oak), Aino Vehmasto (The Secret Love Parade) and Olivier Perez (Garciaphone) who lend their voices to this work, where in other guitar motives are repeated over and over, reminding me of Kairos compositions. Something of this album will return there, I'm sure. In this everchanging musicscape adventure is what is leading the listener through the album.

As I said this album is re-released. So is there a bigger plan behind it? I'd almost say so, finding out that Bhava means rebirth. In a way that is what happened here when the e-mail landed in my in-box announcing Bhava. This version is less unique as the book of art which accompanied the original release is not re-released. The album is and that is enough. Again, I am so surprised by a Snowstar and Tiny Room release. Believe me, if you haven't heard Bhava, it is time to do so, soon.

You can listen to and buy Bhava here: