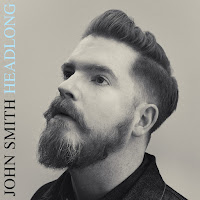 Not so long ago I reviewed an album I found on Noisetrade.com with a man with a darker voice and a hipster beard. For the life of me I can't remember the name, but will find out of course (Josh White). The music was folkish, the lyrics variations on a declaration of love for the Lord. That was a bit of a shocker, that I liked songs with a message like that.

And now another album with a front like that. That is where similarities end. Smith may sing about faith, it's in a personal relationship and the Lord does pass by once.

John Smith originally is from Devon in the U.K. With Headlong he released his fifth album, all self-released. "I don't think any label would work as hard at the job as I do", sounds like the true DIY mentality. Next to playing his own music, Smith plays as a touring guitarist for e.g. Lianne La Havas, David Gray and Lisa Hannigan. And so the impression of a hard-working musician emerges from the info I found on John Smith.

Headlong is the kind of laidback singer-songwriter album that is in danger of just passing by after I put it on. Only when I pay truly attention to it, it comes alive. With a song like 'Possession' John Smith seems to enter the 70s. The song seems an amalgam of different singer-songwriters of the era and comes up with the best they could have produced together. With his somewhat rough voice, John Smith adds his own trademark to it. Then listen to how the electric guitar comes in. A little musical piece of heaven is shared with us toilers on the planet. 'Possession' is a true gem of a song.

And as soon as I discovered this treasure, Headlong opened itself to me. The delicate acoustic guitar playing, the space in between it all, the arrangements. Above all John Smith's voice that rides the music like a surfer the highest waves, majestic and superior.

Just don't expect anything new or revolutionary. John Smith offers pure and decent songs. Songs that will endear themselves to you, given half the chance. Headlong is the kind of album that is ideal when that moment of the day or week presents itself giving you the moment to familiarise yourself with a new album. That moment when nothing else is expected. Put Headlong in the player, lock yourself away behind your earphones and sail away with John Smith. It will be a good 40 something minutes.

You can buy Headlong here: