Is This The Life We Really Want? Roger Waters 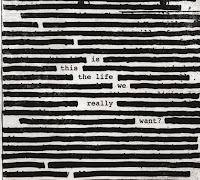 On Friday 2 June I went to my local record shop to get me a copy of the new Alt-J and came home with the the latest Roger Waters. Alt-J was not available yet due to logistical problems and Roger Waters was. My hero of the second half of the 70s. Three Pink Floyd albums can be found in the first three spots of my list for the 1970s this year in Music Meter.

Coming home with the double LP I waited till the late evening before I put on side A of the first LP. I heard nothing new. Nearly every note, voice collage, sounds, vocals sounded (too) familiar. And yet, Is This The Life We Really Want? blew me away. the album blew me away like 'Wish You Were Here' did in 1975, 'The Dark Side Of The Moon' one month later in 1976 and 'The Wall' in 1979. On average 40 years down the road, finally another album by an ex-Pink Floyd member has that same effect.

To be honest, I do not need more words to express what this album stands for. Anyone who is a Pink Floyd fan of the music produced from 1973 onwards will find something he likes on this album. There is only one thing keeping it away from being an ultimate masterpiece: the absence of the guitar of David Gilmore. If Waters had shown himself from his magnanimous side, he had called his two remaining old pals and asked them to play with him. Chances are that Is This The Life We Really Want? would have been even better.

The guitar is replaced by an orchestra or loads of violins. Nigel Godrich, by now a very famous producer, has brought the best out of every one involved. A clear sound, a great sound and great orchestration. It almost makes up for the lack of a guitar. Over time I may get to appreciate this album really for what it is and not for what it is not.

The album is as dark as the lines on the art work. With age, Roger Waters is 73, he has not become more mellow. Everything and everyone he does not like will get the brunt of Waters. The current U.S. president for starters. Individually we may all be alright or less so, generically nobody really knows how good or bad things are and what all the changes in front of us, whether climate, technological or economical, will bring. Roger Waters is still not an optimist.

Is This The Life We Really Want? is an oral trip. There is so much to discover in the spoken word, the fragments of old, the music. Listening deepens the impact with each session. So here I am, again writing the praises for a piece of art produced by an old rocker now in his 70s. Whoever said that older artists just are not inspired any more, is proven very wrong again. There's life in them and some, like David Bowie last year and now Roger Waters, are even totally relevant, not just very good, like The Rolling Stones and Ray Davies.

It leaves me with one question only: what took Roger Waters so long? 25 years to come up with 54 minutes of music. What happened in the meantime and why now? Trump? If so, something good has come out of his presidency.