Hymns To The Night. Lea Porcelain 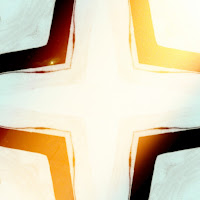 When the coverart is what is suggested in the name it gives an album this little extra. I am looking at a piece of art. Ablaze with light and brightness.

It is that town that Lea Porcelain is working from. Julien Bracht and Markus Nikolaus recorded the album in Funkhaus, the building where the state radio of the German Democratic Republic broadcasted from. Fact is the duo does not let in any light in its music. It took me a while to get used to it, in fact. But once I did, I started noticing the nicer things hidden behind the deathlike voice and dark electronics. Hymns To The Night started to come alive for me. Perhaps like denizens of the night come alive, like Count Dracula, but alive.

The darkness is Joy Division and other U.K. bands of that time, while the rhythm is the U.K. eight, nine years later when The Stone Roses, The Charlatans, Happy Mondays and such broke out of Manchester and the Hacienda. With Soft Cell somewhere in between. And this fact allows Lea Porcelain to add a pop feel to some of its songs. That is the moment the light comes in through the blinds. Look for it and you'll find it.

Take 'Similar Familiar'. The electronics and the rhythm are characteristically dark. The singing is trying to remain dead, but just doesn't succeed any longer. The track becomes highly danceable. It's The Cure that is taking over in the best kind of way.

In 'White Noise' the mood goes totally down. Just a piano and a voice and I'm taken back 30 years to the album of another German band, Alphaville. 'White Noise' is the slower and more serene little brother of 'Sounds Like A Melody' and 'Forever Young'. Lea Porcelain is able to surprise me and has more that one tune to its whole. It not only makes the darkness bearable, it does much more. Hymns To The Night gets a deeper and a more shallow side giving it light and shade. Both type of songs become better because of it.

'A Far Away Land' has Tubeway Army darkness and melody. Deep synths play the basis, lighter sounding ones fill in the melody. Again I'm drawn in, brought back to a time when I was so much younger, yet in sync with Lea Porcelain. Perhaps more so than I ever was with Tubeway Army at the time. There is one difference, a major one. The music then remained dead as if the bomb had already fallen, this music is hedonistic, even if it sounds dead. It's vibrant with electric pulses, reanimating all the time, as if addicted to it, playing dead to get more shocks.

Lea Porcelain took me a while to get used to, but once I did, I started to have a good time with Hymn To The Night. It has several sides to it that it shows in all its glory. Count Dracula may be flying in the night, he's without a chance when the people start dancing to this album. No need to fear anything any longer. With a debut album like this, the world is at your feet. At least it should be.

You can listen to 'Similar Familiar' here: