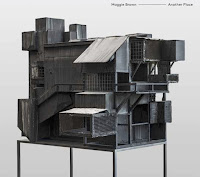 My introduction to Maggie Brown went by way of a review by Erwin Zijleman in 2014 that triggered me to listen and subsequently write my own review. After that I did an interview with the band, was present at a live show, reviewed singer Marcel Hulst's solo album and release show. The result being that my expectations for this record are sky high. In 2014 I commented on 'Maggie Brown' that it easily was the best record from Dutch soil that year. So where are we three years later?

The three pre-released songs already soothed any anxiety, if there were any, on my end and the first listening sessions with Another Place have convinced me only more how good Maggie Brown is. The album is filled to the brim with melancholy pop gems that are so good to listen to. The songs sooth my soul like only the best albums of this kind do. The kind of songs that make me feel that life is so much worth while living. (No worries there, people!) In other words, this is an extremely beautiful album.

In atmosphere the album tends more towards Hulst's solo album under the name Mountaineer than towards 'Maggie Brown'. The small pieces of elation that album held have given way to a deeper level of introspection, without losing an inch of pop feel. The difference is that Maggie Brown is a band and all players claim their space within the songs and at times all together, building a song up, flashing it out.

All songs on Another Place are pop songs of the most serious kind. The kind that demand listening, simply tell you to pay attention, as all will be lost without it. That is a serious demand in 2017 in a time when attention is one ping from dozens of social media away. (In fact I was interrupted right at this point.) Now I am from a time when we lived by albums. My friends and I could sing whole pieces of albums to each other. We listened to them as one piece of art. I am so glad that I still have that longing to do so. Most of my friends from back then have lost it long ago. I am so glad because this is exactly what Maggie Brown offers the world: a ten song piece of art.

The music of Maggie Brown is always somewhat subdued. There hangs a deeply felt sense of melancholy over Marcel Hulst's voice. In his soft voice there is a longing for something that is no longer here or for what he knows will never be his to have. At the same time all the brilliant little details show that Maggie Brown knows that every cloud has silver linings and that when the sky falls down on us we will all wear a blue hat. This combination is one of the elements that attracts me so much to Another Place. The music makes me alert, makes me listen intensely and happy at the same time. I find myself with a smile on my face at least half of the time while playing Another Place.

There is so much to enjoy on offer. This is a totally satisfying album by one of the best bands this country has on offer. It all starts with a modest intro, setting the mood and pace of the album. Hardly anything happens but what is pulls me into the album. After a short silence the drumsticks set the tempo and 'Silent Radio' presents itself in all its delicacy and intricate parts. Two guitars and the keyboards weave in and out of each other. How can a song about a senseless topic, silent radio, be so beautiful? I haven't heard the song for years, yet Marillion's 'Kayleigh' came to mind. Not in melody, nor in mood is there any similarity, so I can't explain it.

'Plane Crash' effortlessly continues this mood and interplay. It is 'Another Point Of View' that takes Another Place to the next level. Maggie Brown has put so much detail into the song. From an alternative pop song it slowly transforms into a light rocker in which all the instruments have their roles in flashing the song out, never losing the balance of the whole.

The first single 'Hail To The Rain' is out for several weeks now and is one of the absolute winners on this album. Everything what Maggie Brown is comes together in this song. The band's soft side and its ability to lash out and work the inner dynamics of the song. The singing is superb and the changes in the song are of the kind that bring chills up and down my spine. The end is of the kind that I would like to go on for ever but stops abruptly. There's only one conclusion: this is sheer beauty in my ears.

Not all songs can be this good. So it's inevitable that 'Loss Vs. Weight' is not as good as 'Hail To The Rain'. The good news is that the common denominator of Maggie Brown is at such a high level that there is nothing to worry about.

It is in 'Void' Maggie Brown really sets its sails. This 8 minute plus song starts off as an "ordinary" Maggie Brown song. After things go silent, I get the impression that this part started out as a jam session, until something of a structure rose from the bass and drums starting the interlude in the middle of 'Void'. First a single piano note mixes itself with the rhythm section, until slowly but surely the whole band rises to the occasion and creates the Maggie Brown variation of a sonic storm.

Back to a structured song. 'Penny In The Long Run' is a Beatlesesque pop song with REM guitar playing. The song is more direct than what came before. The guitar sound is different, the snares are attacked and not stroked, giving them a more snapping sound. This song would have profited though from a The Beatles 1963 length song. Without the last repeated refrain it would have been brilliant. Now "only" more than nice.

The title song is of a dreamy quality that Maggie Brown seems to have a patent on. Despite the fact that it is one of the louder songs on the album, 'Another Place' hovers. Like not from this earth and barely noticeable. A song that reminds me at the same time of Elenne May, that other band from Amsterdam I like so much. Both are able to put more into a song than strictly necessary without losing essentials, but add to them so that their songs come out more beautiful. When the lead guitar enters 'Another Place', the song is lifted and about to take off for that far off galaxy it came from.

It all ends with a piano introduced song, 'Hummingbird'. Again only one band comes to mind, The Beatles. 'The Long And Winding Road' to be exact. And while listening to 'Hummingbird' the realisation strikes me that I like this song so much better. 'Hummingbird' is the perfect ending to this album. The kind of song that can bring tears to my eyes. No lyrics in the final part, so let's bring in 'Hey Jude' as well. That happens to be my first self bought single and what can beat that experience? Nothing. That aside this song is perfection. Like 'Hey Jude' is perfection. Maggie Brown, I think I can not give you a finer compliment than this.

A new album by a band I like is always something to look out for. Exciting and worrisome at the same time. There's always this nagging little voice in the back of my head asking me "will it be good enough"? No need to worry any longer. Another Place is all a Maggie Brown fan could wish for and more. A few songs go over all that went before.

On 1 July the album release party is in De Nieuwe Anita in Amsterdam. I look forward to being there.

You can listen to some songs and buy the album here: