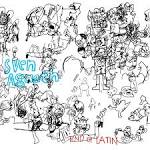 It is not every day that I have to take the title of an album literally. Apparently Sven Agaath debuted with an album where shoegaze rock and reggaeton were combined into an enthusiastic mix called shoegaton. Yes, that is kind of hard to imagine, not knowing the album. Having tossed the Latin part out, the duo is back with an album filled to the brim with just loud rock.

Sven Agaath is guitarist and singer Gino Miniutti and drummer Arno Breuer from The Netherlands. The duo presents an oral trip that is beyond doubt interesting to follow. Not that I like everything that's going on here, sometimes things go so far over the top that my ears reach a point of protest. Taking in the whole picture it's very worthwhile to ride out these moments of sonic storms. Something special is going on every once in a while that sets Sven Agaath apart from the fold.

Now I can start writing pretentious things like some people like to do, but at this point in time I think down to earth does the trick. Sven Agaath produced a fine rock album and took care of the roll in all the right places. This is the gist of it. The band has obviously listened to many bands of the pas two decades, from Foo Fighters to Smashing Pumpkins and back and took out all the parts it liked to build its own version of alternative rock.

It's not that Sven Agaath knows no subtleties, it does, but my overall impression is that of a mammoth tanker, going ahead at full speed. Whatever happens it will be awhile before it is off course. Let alone has stopped. Each song sets a pace and off the duo is. Now an organ could be added or some electronic sound, another guitar, even a lot of experimental sounds can be added, but nothing much is holding the core of the song back. Steady as she goes, helmsmen Breuer and Miniutti.

End Of Latin as a whole is alternative enough to be interesting and has experimental moments that surprises its listeners at the right moments. In that sense the album definitely is not so straightforward. This combination leads to a rocking, but rather wobbly song like 'Razor'. In fact, when the album progresses more and more interesting things happen. Start at the beginning and you'll start noticing them as well.

It is near the end of the album, that the most surprising things happen. All of a sudden there is a dance influenced synth and a keyboard melody. In the title song a goodbye to the former incarnation of Sven Agaath is given. Final song "The Handwagon' brings back all to normal on End Of Latin.

Taking it all in once again Sven Agaath reminds me a lot of my Italian friends Bongley Dead. Just as adventurous and capable of writing and playing great rocksongs.

The album is released as a limited edition, coloured cassette. Something very special indeed, for those still owning a cassette player!

You can listen to and buy End Of Latin here: