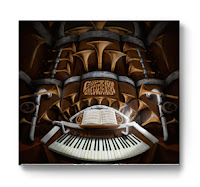 What a pleasant surprise! It's almost 23 years ago that Frank Zappa died. Although the family unleashed dozens of albums from the vaults of the Zappa mansion since, there has been no new Zappa music. Also I have often wondered whether the man really influenced anyone at all or just was this lone star in a far off galaxy of his own. Untouchable, unreachable, on his own, forever.

In comes Captain Cheese-Beard. A band from Belgium with an extremely competent set of musicians and singer who can emulate the voice from long ago and play the music Zappa and (the last incarnation of) The Mothers of Invention. Think 'One Size Fits All' and you're close to what is coming your way. Think 'More Trouble Everyday' in the live version on 'Roxy & Everywhere'.

The name, when I ran into it earlier this week, should have rung a bell. Captain Cheese-Beard? Suzy Creamcheese? No, it didn't. Only after I heard the music. The beginning of Symphony For Auto Horns did not prepare me for what would happen. Spoken words on intergalactic travelling and the exit gate for the shuttle to planet Earth. Right after that introduction, which pretty much turned me off, music bounces up and down in Zappaesk jazz rock and roll, with this unfathomable and unreproducible intermezzos. Horns are all over the place, like the percussion, as are vocal jokes. There is one major difference. This band has a female co-singer, Vanessa Spay. This changes things tremendously.

Captain Cheese-Beard play my kind of Zappa. The Zappa full of irony, where his music serves the song with a strong melody. The solos are there not to freak out but to bolster a song. In short the improvisation is the means to an end. With that Captain Cheese-Beard offers a sense of true humour, a pinch of soul (Spay) and a warmth, that I'd almost call compassionate, something that is usually missing with the sardonic side of Frank Zappa. Hidden in it all is the blues, which is also played without irony, with genuine feeling. This way the music in a way becomes better than the original.

Symphony For Auto Horns is the trip of Johan De Coninck. He wrote the songs, co-arranged, plays the lead guitar and modelled his voice towards the real thing: Zappa and Ike Willis in one. With him is a full band of nine people creating all else that is going on. And that else is interludes based on 70s progressive rock like I heard on e.g. U.K. albums of the time. Like what is happening in the title song. The super jazzy George Duke Zappa sound, the Ruth Underwood marimbas are mixed with pieces of extremely smooth U.K. jazz rock. I never was a real fan of U.K., but what happens here simply baffles me. Who are these people? To play so well, to write so well and I haven't a clue who they are?

There's only one downside. De Coninck was not able to lay that mysterious depth down that Zappa had in some of his recordings. I remember lying in bed late at night with 'Sheik Yerbouti' on my a headset. I bent over laughing hearing 'I've Been In You' this way for the first time. 100 Hundred Zappa's in my ear singing "na na na na na". That is all that I can find at fault with Symphony For Auto Horns, folks.

And it just goes on and on. The sound of Zappa's guitar mixed with a great Hammond organ and weird lyrics about Gargamel, George Harrison and Lemmy all in one chorus. By the time 'Tash And A Guitar' is played out I'm on my back and have surrendered fully to Symphony For Auto Horns. 'Coma Aroma' is the latter Zappa. With a light reggae beat and floating sounds, the horns all over the place.

Symphony For Auto Horns. I did not have a clue what to think when I received the album (and band) with such a strange name, just a few days ago. Already I'm ready to proffer that this album is the biggest surprise of 2016 to date. It's tons of fun, it's soooooo good and extremely well played. No doubt a stark contender for the top spot of 2016 albums. It may be a pastiche but truly as good as the real thing, with a lot of feeling mixed in.

You can listen to the whole album here:

or buy the album on Bol.Com: