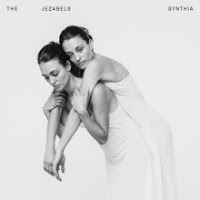 Decades ago my mother crossed the Atlantic with all her belongings, including a Frankie Laine album. Now I haven't heard that album for years and years as in decades, but one of the songs was Jezabel. A tormented song about, I don't know, because I didn't understand the English language yet, but not all was well in that song. That my infant ears could hear.

Jezabel? Didn't that have something to do with the Bible and fallen women? Time to have a look. And yes, Jezebel, a queen of Israel, daughter of the king of a close by tribe, incited people to follow Baal instead of Yaweh and was defenestrated for her sins. So, fallen is to be taken quite literal here. The question is whether windows were that high circa 900 B.C., but she met with a gruesome end after the defenestration to be sure.

Currently I'm listening to 'Synthia' by the Australian band The Jezabels. Hence the little history lesson before I really start. Why name yourself after this particular woman?, is a fair question. That I do not have the answer to.

The Jezabels come from Australia, Sydney to be more precise and consist of two ladies and two gentlemen. Hayley Mary is the front person, Heather Shannon plays keyboards, Samuel Lockwood plays guitar and Nik Kaloper is on drums. Together they have released three EPs after which three albums followed, 'Prisoner' (2011) and 'The Brink' (2014). Musically I am remembered of bands like Warpaint, Lucius and Florence + The Machine. The music is a mix of indie rock and dark 80s synths. The band dares to go all out and to hold back and work with atmospherics instead of pure power. In both ways of expression it succeeds, without excelling.

Synthia is an album that I really have to be in the mood for. Hayley Mary's voice is not one to easily like. It is not a powerful voice, where several songs need that power. At times too much of it. Where the songs calls for subtlety things are alright though. When she calls on a darker register of her voice things even get better. In a song like 'Come Alive' there is so much longing sounding through. It is totally convincing.

This is only one aspect though. The other is all those synths that I have to go through. (Synthia is a nicely chosen name for the album.) I am just not one for endless synths as they make me go back to that age of doom and gloom they call the 80s.

In the end Synthia does seem to win though as the album sort of grew on me. In the slower songs like 'A Message From My Mothers Passed' and 'Smile' all the qualities of The Jezabels come forward in all the right ways. Strangely enough The early the Pretenders come to mind here, synths not withstanding. (I even put the first two albums for the first time in years, as I did with Frankie Laine.)

In short, Synthia is a mood swinger as far as I'm concerned. The Florence Welch part of The Jezabels is not for me, but I can well live with the rest. In the end there's only one thing I really do not have the stamina for, the final song with that name. Too much, too long, overkill.

The Jezabels had to cancel a tour in Europe this winter due to a serious illness. Let me end with wishing you all the best and hopefully a full recovery.

You can listen to 'Come Alive' here: