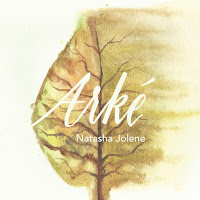 Time for another album that I picked up on Noisetrade.com, that website that gives away music for a voluntary donation. If you've never been there, go over and peruse, as there are hundreds of albums, EPs, songs and special compilations by artists who like to get heard and give away their music for an amount you choose to give. Here's my payment in kind. (The album is no longer available there though).

One of the albums there is by Natasha Jolene. She is from Vancouver in Canada and Arké is her first mini, seven song, album, after releasing a single in Februari of 2015, called 'Warm Winds'. Now Vancouver has been mentioned on this blog before and seems to have a large population of modest artists that make nice to outstanding albums.

When Arké started playing for the first time, I thought I had put on Gretchen Lohse's album instead. 'Delight' is just as hesitantly played and sung as the songs on her 'Primal Rumble'. What reassured me in the end was Natasha Jolene's voice, which is more regular than Lohse's. From that moment on Arké developed into a delightfully easy listening experience. Let me call it chamber music, the kind that allows you to dream away on. In my mind I'm able to lay myself down on the music coming from my speakers and float with them around the room. Only listening, enjoying and relaxing.

It's time for an official announcement from her Bandcamp webpage. First Arké is Greek for beginnings. Secondly "Arké is a concept album that explores how the beginning of our story affects the story we live in every day. It uses seven songs of imagery, poetry and symbolism to paint the picture of our human experience through the lens of Genesis 2 and 3". That is a mouthful, but forces me to start listening to the lyrics.

Musically there is also more to Arké than just this fragile beginning. In 'The Dust' there is a full band exploding into a finale. However, all begins with Natasha Jolene Stobbe's singing and piano playing. Around that, she and producer Rick Colhoun seem to have built exactly that what a song needs as an extra. That could be just a harmony vocal and a lead guitar, as in the bigger part of 'When Love Subdues' or a big finale. Mostly on Arké a minimum of accompaniment reaches a maximum of effect. A sure sign of how pure the music of Natasha Jolene is and that more certainly does not mean better as a standard in music.

Natasha Jolene is another example of how many talented singer-songwriters there out there. All want to be heard and deserve a chance at that. Natasha Jolene presents herself in a very pure form on Arké, embraced and carried by the beauty of the music around her.

You can listen to and buy Arké on the Bandcamp site of Natasha Jolene: