Sermon On The Rocks. Josh Ritter 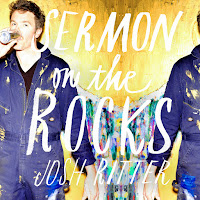 There's one song by Josh Ritter that I can sing, having heard it for years in the car, until my cassette deck broke down early summer 2015. 'Man Burning At Both Ends' is a fabulous rock song, not unlike Roxy Music's 'Both Ends Burning'. And that is where things between Ritter and me stop. That, further completely singer-songwriter album is somewhere beneath the stack of forgotten records. I haven't a clue how many albums he's made since. And here comes Sermon on the Rocks. A totally different beast than what I remember Josh Ritter playing, and I like (most of) it.

The singer-songwriter with the somewhat difficult songs is gone and in comes a rocker of sorts. The lead instrument is the electric guitar strongly supported by drums and bass. The rest is circumstantial embellishment. Josh Ritter is clearly in his element here. Leaving the music all the room it needs and not singing more than he really thinks is necessary.

Reading the notes Josh Ritter sends with his latest record, it is clear that he wanted the world and wanted it now. All starts with ambition. What sticks out most for me is the following quote: "I wanted to swing hard". In that he certainly succeeded. "Born hungry, woke up ravenously", is another (almost) quote I particularly liked. In a way it shows in the music, as this album goes straight in for main effects. Like the paint on the cd cover sleeve, it sticks out immediately, direct, in your face and winning.

No songs rocks as hard, nor swings that hard as that one song that is my Josh Ritter song, probably for ever. That isn't the point though. Sermon On The Rocks has an urgency that stems from the approach with which the music is played and sung. It gives most of the songs this little extra. Not unlike The Waterboys had in the 80s and in early 90s during its Irish folk period. This comes forward well in the song 'Where The Night Goes'. A role for a piano that plays these fun extra notes in a very straightforward song. Ritter's voice has that rasp that Mike Scott also has. There you go.

With a song like 'Cumberland' another influence is let in. Let me call it calypso, something exotic Latin American, but 'Graceland' is another option where folk/bluegrass/zydeco meets South Africa. 'Cumberland' is an odd one out on Sermon On The Rocks', but a fun one. It adds to the flavour, short and to the point.

Add a ballad or two and Sermon On The Rocks knows the necessary variation to save it from one dimensionality.

Yes, I was surprised by Josh Ritter. So much so that I decided to write a review any way. At first I just couldn't believe my ears and put the album aside and forgot a bit about it. I came back to it as I may come back to some more albums from last spring. It seems I missed some great albums a the time. Sermon On The Rocks is one of them. Together with Joe Jackson last month, that is now mended. New Order may follow next.

You can listen to 'Where The Night Goes' here: