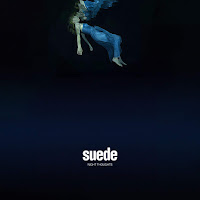 Three years after the comeback album 'Bloodsports', which received a favourable reception on this blog, Suede is back with its second album into its second part of its career. The reception is downright positive. As good as 'Dog Man Star', Suede's second album and the last one with Bernard Butler on songwriting and guitar duties. No matter how good people say that album is, it's not mine. I never got a click with it. That really came with the third and even more the fourth album. So how do I fare with Night Thoughts?

Pretty well so far. The album starts heavy weight style. An instrumental with a whole orchestra playing. A signal is given, this is serious stuff, you better start paying attention. When the intro takes a turn a recognisable Suede song starts, which is followed by the brilliant 'Outsiders'. This song has all that makes a Suede song so good. The high voice of Brett Anderson, who gives 'Outsiders' it's slightly desperate feel. In the mix the broad synth sound fills up all, making the song absolutely float. The guitars are all over the place. Underneath is a solid foundation making the rest possible.

Brett Anderson may receive a lot of attention as front man. It is Richard Oaks (guitar) and Neil Codling (keyboards) who are responsible for the signature sound (and the songs) of Suede. Oaks is a master of guitar licks, rhythms, embellishments and solos. Codling lays sprinklings of magic over and underneath that all. Fairy dust that sparkles just as bright as the fantasy stuff of Disney.

Night Thoughts is a complete piece of work. One song (nearly) moves into the other and was written as if film music. To underscore this a whole movie was shot accompanying the music -or the other way around. As this is a blog on music, I solely focus on the music. This part is so okay. Where 'Bloodsports' was a good album, Night Thoughts is a better album in the right ways. There's so much more urgency. The band does not mind to rock out, mix in some 80s synths, while not forgetting a ballad along the way.

'No Tomorrow' is a fine example how hard Suede rocks out. With a guitar lick nicked from Pink Floyd's 'Sheep', one of the songs the old Floyd rocks out hard as well, there is a tremendous drive in the song. Despite that it reminds me of songs on my two favourite Suede albums, it has a much harder edge. As if there's no tomorrow and all has to happen right here right now.

With mentioning Pink Floyd another element of Night Thoughts presents itself. It has some prog elements in the more dreamy sequences, as well as in the theme changes within some songs. As a whole the album consists of 12 songs, but there are elements in atmosphere connecting the parts that make them more of a whole. An important element of symphonic rock.

Talking of prog, 'I Don't Know How To Reach You' could easily have been a part of 'Misplaced Childhood', Marillion's finest album. It has the same high sounding lead guitar, the mystery in the music and the lament for something gone by. A beautiful ballad that is like an ALbert Heijn knife set: it has a sharp edge, giving the song a spicy undercurrent that lifts it to great heights, big rock ending and all.

In an already rocking 'Like Kids' a guitar literally kicks in for an extra oomph, before a kids choir sings it to a, rather devoid of life sounding, end. 'I Can't Give Her What She Wants' in return starts small, but anyone giving it a closer listen, notices so many different melodies in the background playing around each other, interweaving. It is as if tension is built up for a large band release, but even after the drums announce themselves the tension is kept in place.

The overture returns towards the end of Night Thoughts. 'When You Are Young' turned into 'When You Were Young'. Time passes for each band and its fans. With 'The Fur And The Feathers' Suede chose for a grand finale. Full of passion, enlargement, an orchestra, without going full out for over three minutes. When bass and drums kick in the listener is carried towards the end.

You can listen to 'No Tomorrow' here: