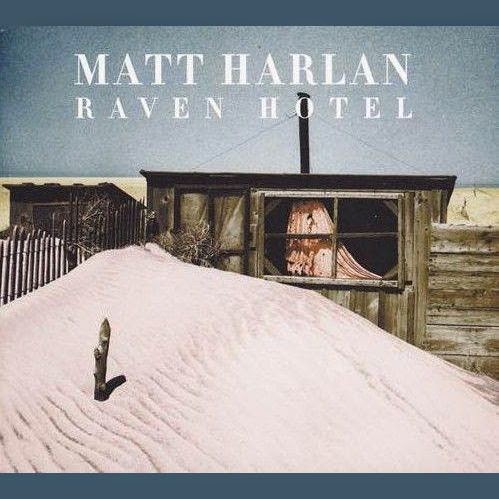 Matt Harlan is a veteran of WoNo Magazine. After the introduction following his support act at the Q-Bus in Leiden several years back, we reviewed his debut album, 'Tips and compliments', followed by an interview that was later published on this blog. We also reviewed his sophomore album, 'Bow and be simple' of which we wrote "Matt Harlan flexes his muscles in a sure and deliberate way". In 2014 its time for his third album, Raven hotel. And guess what, after just a few listens I can honestly say that Raven hotel again is better than his previous album.

With more free flowing melodies, songs that are expanded in mix and sound, wider than before and a fine contrast with rockers and ballads Matt Harlan not only lives up to a promise, he goes way beyond this promise. Here's a singer-songwriter who is moving up fast in the ranks and is about to become a major league player. The quality of the songs are only part of the story as far as I'm concerned. There is also a sense of self-confidence in his presentation, that allows him to delve deeper into his emotions. Matt Harlan is singing like he means it from a to z. I can't escape the feeling that he seems more at ease with this set of songs than on 'Bow and be simple'. At times singing a lot too, reminding me of Bob Dylan's songs of old with words all over the place. The way the songs are produced finishes things off in quite a nice way. Just listen to 'Old Allen Road' and you'll know what I mean. It reminds me of his fellow Texan and colleague Adam Carroll's finest song 'Errol's song' and goes beyond it, because of the atmosphere and depth he gives the song.

The next thing I notice listening to Raven hotel is that Matt Harlan dares to go beyond the singer-songwriter idiom. The jazzy, late night barroom 'Burgundy & blue' is so different from what he's ever done on record till now. Although it's not totally up my street, the song is tasty and well executed, as it is easy to hit the wrong nail with a song like this. He doesn't. 'Burgundy & blue' is an extreme example. Generally the balance between the singer-songwriter songs and the more up tempo folksongs and rootsrockers is well made. On top of that there is so much subtlety in the instrumentation that is added to all songs. Whether a banjo, a piano or an organ, all are played and added in great taste and totally in service of the song. Harlan and co-producer Rich Brotherton must be happy with this result. A compliment to keyboard player Bukka Allen is due also. He plays a defining role on Raven hotel. (As does Brotherton who plays sort of everything else with five or six strings.)

It is obvious that I like Matt Harlan's voice and what he does with it. Most surprising of all for me is that he gives the lead vocals away to Rachel Jones in 'Riding with the wind', who accompanies him in a few other tracks as well. How confident can a singer-songwriter get? It is one of the many highlights of this album.

For Raven hotel doesn't go that it is talking the talk, like the sang about radio station in opening song, 'Old Spanish moss'. Raven hotel is pure inspiration, an album that Matt Harlan can be proud of. A must listen to for anyone interested in singer-songwriters, americana, roots and folk. Nothing more but certainly nothing less.

You can listen to and order Raven hotel here on Matt Harlan's Bandcamp site: