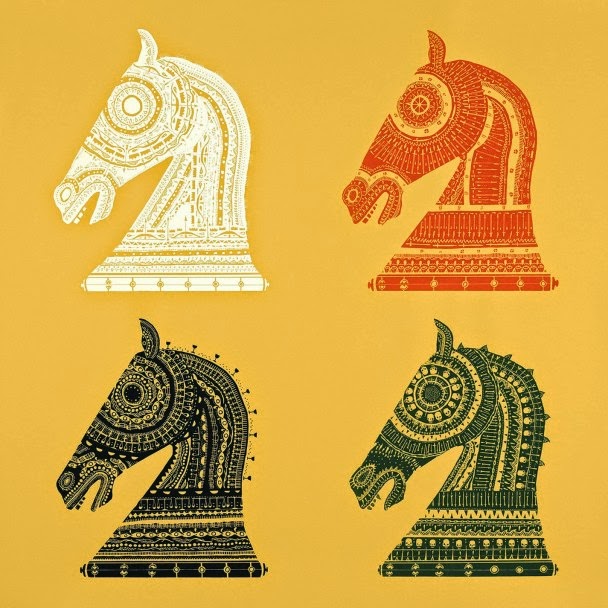 One of the greatest mysteries to me is the following. Upon hearing one record by a band that, at least to me, jumped on the new folkrock bandwagon, I dismiss it directly ("Not another one!"), while when hearing another record I welcome it like a long lost friend. When I listened to Dark arc for the first I must not have been listening at all, as it did nothing; to focussed on the job at hand I guess. On second listening I knew straight away that this was an album filling the void of a few years without a new The Decemberists album. There is no other band that jumps to mind for me, mainly because of Zac Little's pronunciation. Followed by the vocal melodies and then the music.

So we have one explanation why Darc arc falls to my good side. Not necessarily a very positive one for Saintseneca, as I am triggered by a likeness. If I delve a little deeper into the music, what I can come up with, is that the quality of the songs are good. Not as good as The Decemberists' folkrock opera 'The hazards of love', but certainly close to 'The king is dead'. Zac Little's voice is good in his own right. Slightly high, with the skills to vary in his sound and befitting the harmonies with Maryn Jones, who also gets the solo spot in the impressively subdued 'Fed up with hunger'. A song that reminded me instantly of the songs on Gretches Lohse's 'Primal rumble'.

The next thing I really like about Darc arc is that it holds several styles of songs without Saintseneca losing itself. So although Saintseneca is not totally original in sound, there are first inklings of developing its own sound.

Saintseneca is Zac Little's project which started to develop more seriously after he left his hometown in Ohio for Colombus. More people latched on and together they released the first EPs and debut album 'Last'. This proved a good name for the original band as all were replaced when touring started. So whether the current band is just a vehicle for the promotion of Dark arc or not time will tell. Saintseneca's sound starts with acoustic instruments. Anything with snares, also some more exotic snare instruments are in the mix. Without being puristic about in. There are electric guitars to be found in some songs as well.

The production is wide. The whole soundscape is filled from which the lead vocal escapes and sometimes a lead instrument, although these are only sparsely present. This mix makes Dark arc a busy record, which is controlled by working with dynamics that at the same time allows for the variations in sound that make Dark arc a much more attractive album. With that I have pointed to another feature that appeals to me on Darc arc.

Saintseneca is not a band that has arrived in my opinion, but is on route in a very interesting and at times attractive ways. A band searching for its own voice while on the way making some beautiful songs that make me want to put on some older records that I haven't listened to for too long, while at the same time playing Dark arc as well. Although not all songs on the album manage to keep my attention span good and tight, as a whole Dark arc convinced me in a very positive way.