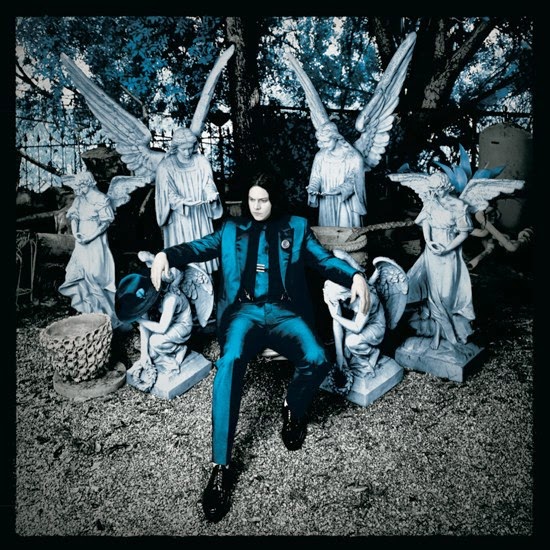 My first exposure to a Jack White song was not through The White Stripes, but through a cover played at a Sukilove gig in LVC, Leiden. The Belgian duo played a blistering cover of a song called 'Fell in love with a girl'. Enough to make me very much interested in the original. Which did not disappoint.

In 2014, after a torrent of releases by many different bands, producer´s duties and his solo album 'Blunderbuss', a new Jack White record has become sort of normal. Oh, another Jack White record? I even postponed listening to it. Boy, was I wrong. Jack White comes up trumps with Lazaretto. His best record since 'Elephant'. No doubt.

Lazaretto kicks off with a mean sounding organ riff. Think DeWolff and you're getting close. A riff that is echoed by an electric guitar, a piano. In this dirty blues White sings about 'Three women' or ex-women more likely as they are in California, Detroit and Nashville. The song is blistering with a great slide guitar part tearing air apart over the heavy riffing. First generation blues hero in hindsight Blind Willie McTell is credited as co-author.

Title track 'Lazaretto', is just as strong, perhaps even better. Again a riff, over which Jack let's himself go more vocally and in the guitar solo as well, which is classic Jack White over the top playing. The surprise is the violin played by Lillie Mae Rische, in what I call a Papa John Creach style. Listen to 'Dragon fly' by Jefferson Starship and you'll find out just what I mean. 'Lazaretto' is one of the highlights of Lazaretto. The fun part is that the real fun is only just starting. Lazaretto shows many a face of Jack White.

The White Stripes have released several fine records of which the sound got bolder and bolder over time, but it always left me wondering what the band would sound like not being a duo. With Lazaretto we have the final answer on that one. Like this, as there are no more limits on Jack White's recording creativity. Anything goes. Thus this multitude of sounds, styles and sounds was created. 'Would you fight for my love' is a piano ballad. A beautiful song that allows White to show his softer side without creating a wall of sound to hide behind.

The instrumental 'High ball stepper' creates all the noise the previous ballad was lacking and was the first sound released of Lazaretto. Not my favourite track it is, although that is a very relative thing on this record. On a lot of others it may just have been the finest on offer. 'Just one drink' is a The Velvet Underground rhythm kind of song in the verses. Again Jack White is supported by a female vocalist on this song who doubles whole parts with him. Plus one again for Lazaretto. Four ladies get backing vocals credits on the album, so here they are: Ruby Amanfu, Olivia Jean, Cory Younts and Lillie Mae Rische. Well done, ladies. You are a great enrichment to the sound of this album.

'Alone in my home' is another piano driven song. Lavishly broad chords and notes adorn this great song. There's even a ukulele in there. "I'm becoming a ghost, so nobody can know me". It doesn't sound like he's having a great time alone in his home. 'Just one drink' also doesn't seem to help. Too many won't either, I'm sure.

Jack White touches upon these different styles and comes up with a sound belonging to his hometown of Nashville. 'Entitlement' is almost pure country. Country hints are all over Lazaretto, but this one is the most straightforward. Of course 'Entitlement' holds some Jack White signature moments, like a typical chord change, but this is country, pedal steel, singing and all. Lucky for me, Lazaretto goes back to some heavy riffing with 'That black bat licorice'. With a little imagination there are even some Zappa like interludes. Just add the xylophone and you're there. (Invite Ruth Underwood for a small part next time?) Again that violin. Just love it.

Lazaretto goes towards the end with another ballad with a country flavour. 'I think I found the culprit' is another song that defines the Jack White of the last six years. It could have been a The Raconteurs song. He kept it for himself for the near (should have been THE) finale of Lazaretto in a majestic way. Perhaps paving the way for the third The Raconteurs album? It's about time as far as I'm concerned. 'Want and able' ends it all, but is not a song really worth noting. The game was played and ended game, set and match in three straight sets. The winner thanks the audience before going to a well deserved shower.

Where 'Blunderbuss' was a very decent album and certainly one of the better of 2012, Lazaretto is a top album. Personal mishaps are usually a source for inspiration. Jack White found it for this album alright. Lazaretto touches on several genres in convincing ways. Jack White masters them all and adds himself in his full glory. There´s only one thing left to say: Take your hat off and make a deep bow.

You can listen to 'High ball stepper' through the link below: