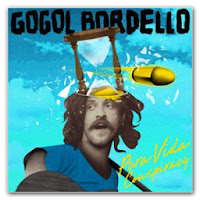 Gogol Bordello produces such obvious party albums, that I simply forget that perhaps they deserve a review. It happened to 'Super Taranta', who's songs in the end I really liked (and is six years old I now realise!). I admit that 'Trans-continental hustle' made less of an impression. So let's make up for this omission.

Pura vida conspiracy is a mix of inspiration, punk, gypsy-Balkan-East European music, balled energy and plain trickery aimed at maximum effect on stage. Live the band really goes for primary emotions and knows every trick in the book to make an audience go off its rocker. That is hard to capture on record. Most people tend to listen to music on their own, in isolation. That is if someone really wants to listen to music. So Gogol Bordello must have a few tricks up its sleeve to pass this muster as well.

On Pura vida conspiracy Gogol Bordello passes this test easily. Most songs are multi-layered. It all starts with the voice of Eugène Hotz, the Ukranian born front man of the band. He sings with a strange, fat East-European accent. Leaving out several words out of sentences. It's not a voice that belongs to punk or rock songs. I'd expect it in the village band of a Carpathian village or something. At their very basis a lot of the songs have this side to it. Eastern Europe is never far away on Pura vida conspiracy, no matter what else is going on capturing your attention.

If e.g. you listen to 'Lost innocent world' you hear the rock driven, muted guitars. The punk, very busy drums. Over this all sort of "gypsy" instruments are laid. Some female voices, that suggest a certain softness, while the song is hard. During the song all sort of tricks are going on with the dynamics of the tempo and loudness. All aimed at the possibility to overdo this on stage. The passages in Gogol Bordello's music that live audiences love so much. On record these edges are softened. What is left is a great song with loads of things going on that beg listening or e.g. while cooking sing along to loudly. 'Lost innocent world' is a song that is Gogol Bordello to the t. It holds all that makes the band so attractive if you like this mix of musical styles. From the local orchestra that lets the village dance at the yearly harvest fest, to the gypsy punk outfit that makes 21st century audience go crazy. You find it all bundled into one band.

To compare the band to others, I'd start with Dropkick Murphys, a band that does the same for Irish traditional music and punk(rock). Also Norway's finest Kaizers Orchestra deserves mentioning as they mix traditional rock with eastern Europe music, as does De Kift in The Netherlands, although this last band aims a little less at the punk infusions, but it is very easy to imagine they'd do. All these band know how to build a party with music that goes just of the beaten path and thus do not appeal to everyone. These people miss giant parties and that is just as well, as these parties can not be built in arenas, let alone larger venues. Believe me, it is possible to have a giant party in a club sized venue.

To come back to Pura vida conspiracy. My impression is that the songs are a lot better than on 'Trans continental hustle'. They are more fluent and the melodies more fluent. The result is that I listen to the album and enjoy listening to it at home as well as on the train. From the more Italian/Sicilian influenced 'Malandrino' to the breathcatcher 'I just realised' the album always presents something worthwhile. However, be warned. If you want to see the band live and do not prefer to pogo, be satisfied with a place in the back or on the balcony. It's better for your health and the fun isn't any less for it.