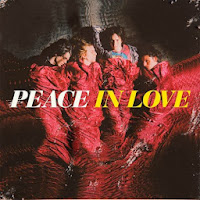 Peace and love and happiness? To out of three are in the title of the album and the band name. So does the product take care of the third? The short answer to this question is yes. In love is a fun pop album. Sounding like Britpop bands have been doing since the mid-90s. Infuse some pop, with enough rock, add multi-layered vocal harmonies and loads of guitars and the world has another U.K. pop band.

Peace is from Worchester in the UK actually and is around since 2009. In love is its debut album. The band is obviously influenced by the likes of Oasis, Supergrass, and younger bands like The Rifles and The Automatic, if we leave out the shouting in the background. At the same time the band surprises in the second song ‘Follow baby’ with this mellowly sung chorus. Harrison Koisser sings “We don’t live forever”, how close can a reference be?, but the chorus is a take at originality. Changing the mood of the song itself and the album as a whole.

Peace dares to do this more often, the exuberant ‘Lovesick’ is followed by the slow ‘Float forever’ and the somewhat prickly ‘Wraith’. As a whole In love is missing an extra layer of depth that makes the album a killer. Not unlike what Dutch pop rockers Handsome Poets is lacking at the moment. There are moments of perfect pop, but the little extra is missing with on In love. It's that little edge of danger that is lacking. ‘Drain’ is the exact opposite of that. It starts with the ‘Tell it to my heart’ melody and has some disco influences in the rhythm as well. Well sung, well played, fun all over, but a little to clean to my taste. The intermezzo makes up for that. The freaky guitar parts, the muted notes, show that Peace can show of in other regions as well. This makes that overall the album comes out on my good side. Especially the final songs on the album hold a promise for the future.

Peace shows on In love that it is a new, young band with potential. There are several songs on the album that are really worth while listening to more than once and twice as well, as I did by now. The question is, which road will Peace take after this?