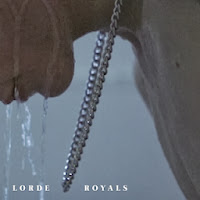 There are songs that simply crawl under my skin. It must still have been summer when I heard Royals for the first time on the radio. Music in the back ground. I heard something that was special, but not of the sort that made me go the extra mile, not even an extra step. Just another girl vocal group or so I thought, doing something on the line between beats, r&b and pop.

Royals also didn't become a real hit. Lingering at the bottom of charts, not disappearing again and not really rising also. Then I lost notice for a while, until I heard the song again some weeks back. As in really hearing it and not as musical wall paper as the radio to me often is. (I'm not a radio listener, but an album listener. Somebody very close to me is a radio listener.) This time I immediately followed up on hearing the song again. Putting it on my head phone and heard all the intricate ear candy going on.

Royals is what I call a "non song". Almost everything in the making of a traditional song has been stripped away. No instruments, nothing making up the melody of a song, except for the voice(s). There is something substituting a bass guitar and very thin electronic percussion. All through the song finger clicks keep time. Finger clicks with loads of echo in there, as if recorded in a large bath room or empty museum hall. All else is singing.

The credits for the production go to Joel Little, who must have been under a restraining order. The influence of a band like The xx is there, some Lana del Rey but only in atmosphere. Royals itself seems quite unique, although with a little imagination it is possible to fantasise what a singing group like The Supremes could have done with this composition.

The singing is done by one girl, the now 17 year old Ella Maria Lani Yelich-O'Connor from Auckland in New Zealand. All these intricate voices, deeper, higher, playing off and into each other. Playful and oh so serious, all at once. Making the singing a mix of wonder and beauty. Having created all this space in the instrumental part of Royals, there is so much room for Yelich-O'Connor's voice and she fills it up like The Beach Boys of old, in her own special way. Endless overdubs create an intricate field of singing, that begs to sing along with. "I rule, I rule, I rule, I rule". Each a little differently sung, each a little more forceful, convincing, urgent. A single "o-ooh" is enough for a rapturous moment as well.

The lyrics are about the differences in life style from ordinary folks and the super rich or the royals. And the videos of rappers are sort of summed up. All superficial bling bling and status. A little fantasy, "you can call me queen bee". Many things that we do not have and never will have. "No postcode envy" is a nice term. Irony has it that after what the world has done by massively buying the song and album, this lifestyle is within reach of our young singer.

Something else happened in the meantime also. In November and December Royals has gone top 5 and resides in the charts for over 20 weeks. Apparently more people had the slow burn experience with this song like I had. Royals crawls under the skin, not to let go. The making of a true hit that will stand out for a long time.

It makes me wonder what can a singer of 16, that is able to make a song as special as Royals at this age do at a later age? On the other hand Royals has everything spelling out "one hit wonder" all over it. Time will tell what Lorde will bring. It should be more than just Royals. Whatever happens beyond 2013, Royals is one of the most special songs of 2013. No doubt about it.

You can listen to Royals here in the world version or here in the US version of the video.
Gepost door Wo. op 14:17