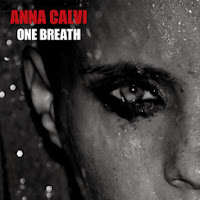 At the beginning of 2011 I was pleasantly surprised by Anna Calvi's first album. An album that I played regularly for a while, but I have to admit that it's been a while since I played it. I had more or less forgotten about her. One breath came just in time. Again I'm pleasantly surprised. One breath is an album that shows a few sides of Anna Calvi worth exploring in this blog.

Anna Calvi was born in 1980 in Twickenham. Her musical career only took off after being signed in 2009 by Domino Records. In 2010 before releasing her debut she toured with well-known artists like Arctic Monkeys and Nick Cave. In January 2011 'Anna Calvi' was released, propelling her career and making her name in the world of music lovers.

One breath is a step forward. On the album Anna Calvi shows to be a force to reckon with. She recreates atmospheres from long ago, ranging all the way from Nancy Sinatra's 'You only live twice', to Shirley Bassey, all mixed with classical elements and 80s doom without the fierce, unrelenting drums. All the while keeping the listener firmly in 2013 as well. These moments of rest are set off against tamed, distorted rockers. 'Love of my life' is punky, were it not that the song is to "difficult" rhythm wise. There's too much going on for a punk song, but that is what 'Love of my life' is none the same. Anna Calvi's voice is able to whisper and shout. The dreamy sequence in the same song takes her into Charlotte Gainsbourg territory. A name that can be mentioned more often here as well. One breath has the same sort of mellowness with all these tensions underneath, the French-English singer is famous for.

'Carry me over' is one of the more brilliant songs on One breath. Again many violins, over the hard hit drums, creating a nice contrast within the song, over which Anna Calvi sings like Marc Almond on 'Stars like us'. The gamalan like sounds lend 'Carry me over' some eastern mystique as well. Pretentious, perhaps, yes. Good, certainly. The song attests to the fact that Anna Calvi dares to explore her ideas to the max. That she's not afraid to be an artist and present songs that are not "pop", songs that are not easy to digest. And yes, there are a lot of different influences on One breath. It is all about what an artist does with these influences here and Anna Calvi uses them to make herself shine.

One breath is an album to immerse in, to surrender oneself to. There are several adventures on offer. From the solemn, serious 'Bleed on me', the chant like church song, Gregorian choir and all, 'The bridge' and rockers like 'Eliza'. The mood does change towards the end of the album, becoming more solemn. Another influence seem the electronic rock sound of Django Django, in completely natural style. 'Piece by piece' combines the rhythm with French style female singing.

In short there is a lot going on on One breath. Anna Calvi's second album is an album of a grown up woman, an artist that dares to go beyond the obvious and comes up trumps. One breath is a festival of sounds, a wonderful collection of songs and proof of Anna Calvi's songwriting skills. A beautiful record.