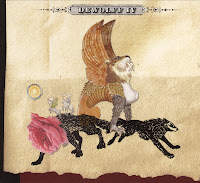 You can listen to 'Voodoo mademoiselle' here.

Dutch psych rockers DeWolff drew a well filled LVC in Leiden on a Thursday night. Warm vintage Hammond sounds, deeply distorted guitars and a tight drum swept over the heads of the audience. An audience that captured people of all ages. From teenagers to people in their sixties, DeWolff attracts them all.

Touring after its latest album, DeWolff IV, that received a positive and well read review on this blog (click here), the band is good, near smoking and will most likely only get better. It is not the sort of music that I play very regularly, like its ancestors, Deep Purple, Led Zeppelin, Cream, Jimi Hendrix Experience, etc. Still it's music that I truly like, without playing it often. And definitely something that I had been looking forward to see live.

I wasn't disappointed. DeWolff set down a great set and grew in the performance to great improvisational heights. Something like twelve songs were played, in just over two hours. The longer the encore lasted, the bigger the smile on my face became and the more heads around me I saw nodding along to the powerful rhythm. Heads of young and old. The mood changes the band took us through were mesmerizing. Hence the title of this post: "Sonic storms and soft tranquillity". DeWolff played us all in a superb way. According to the setlist they played two encore songs, 'Gold and seaweed' and 'The thrills', but if they'd told me it was one, I'd believed it also. Lasting 45 minutes! The band played around this central theme and took off in guitar and organ solos, battles and all, and the big drum solo as if it was 1972, to get back to the central, loud and driving theme. As such it comes close to progrock, but in general its too loud and rocking to be called prog. Psychedelic is more close to the truth.

The show itself was a showcase for improvisational rock, but also for several "real" songs with 'Crumbling heart' really sticking out here, as well some blues based outings like 'Medicine'. There's one thing missing, I could not help but noticing: the hit song. If DeWolff manages to come up with its "Black night", "Immigrant song", or even its "Paranoid", airplay will follow and make sure that great songs like "Voodoo mademoiselle" and "Crumbling heart" will be heard by a wider audience then now. The potential is there to do an "El Camino", as this album sprang to my mind during the show several times. Wild and exciting riffs, some good refrains and a potential for harmonies, all is present already.

In its own right DeWolff seems at the top of its playing at this moment. Seeing how young they are and already have four albums under the belt, I'm truly looking forward to hearing where this trip is taking me. The LVC gig was a great start of my personal gig season!

You can order DeWolff IV here