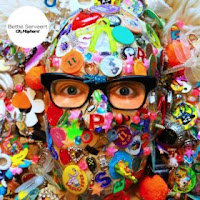 You can listen to 'Had 2Byou' here. (And enjoy the great video!)

Sometimes when listening to The Netherlands' indie lovers' former favourite band I have the idea that there is Bettie Serveert, the trio and Peter Visser on lead guitar. The band plays a song which Carol van Dijk sings over and Visser is off into his own private universe. Live even more so than on record. And I just love it. It makes Bettie Serveert so much more special than all the other bands in this line of indie rock. Bettie Serveert is totally at the top of this game and with Oh, Mayhem! has made one of its best records to date. 2010's 'Pharmacy of love' already was a return to form after the rather bland 'Attagirl'. (Not counting the rather nice live record 'Bare stripped naked'.) Oh, Mayhem! takes the unleashed energy one step further into muscle indie heaven.

Bettie Serveert is a modest, perhaps even a bit shy band, that does not make shy music. That may be the reason that the band never made that last jump to world fame, that may have been around the bend circa 1995. Walking through New York City in that year it was not one of the first musical posters I expected to see: 'Lamprey' and a show announced. The band became somewhat smaller with each record which is totally undeserved. With 'Pharmacy of love' and Oh, Mayhem! this trend should be reversed. The confidence with which this new album is presenting itself to the audience is astounding. There is hardly a dip in sight between the ten songs on offer.

Carol van Dijk seems to have found a new voice past the soft singer that hardly gets over the music. Listening to 'Sad dog' makes clear that there is a slightly harder edge to her voice, going a little deeper than before. She is clearly a better singer, her voice seems more supple, taking on all the guitar antics around her as if stating I'm in control her. Like in 'Had2Byou'. In this little 60s pop pearl the band serves her to shine. And shine she does.

The mood changes in 'Mayhem', the song, is fantastic. The prickly start that morphs into the sweet sung second part and even dreamy third, before we go back to phase one and the despair, followed by the effective solo of Peter Visser, who takes off at the end of the song. Another great change is from the atmospheric 'Monotonous' straight into the hard rocking intro of 'Receiver (Alt. Version)'. No pause, full out as if it's the same song. Very well done as it took me as listener straight into a different mood.

And Peter Visser? He's all over the place on Oh, Mayhem! To me it's such a pleasure listening to him play. A master in finding the relevant notes within the chords and setting the mood of songs by doing what he does to his guitar, the strings, the amp, the effect pedals and atmosphere of the recording room to get the sound he needs within songs.

The role of Joppe Molenaar, the drummer who joined the band for 'Pharmacy ..' must be the injector of loads of abundant energy. Bettie Serveert was presented with a second life. The way Molenaar attacks his drums propels the rest of the band forward. And Herman Bunskoeke is the main stay on bass who keeps everything together in the background. The jell in the mix.

It's simple, Oh, Mayhem! is 2013 first super record. And again by a Dutch band. Either I've become a nationalistic snob or the level of records produced in this country has increased significantly. Either way congratulations to Bettie Serveert for a great record.

You can order Oh, Mayhem! here