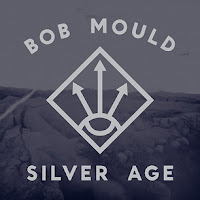 You can listen to 'The descent' here.

Bob Mould has been making records for thirty years. With Hüsker Dü, Sugar and under his own name and I have missed every single record up to Silver age. That makes it possible for me to listen to the album with fresh ears as if it's his first one. (And now I can back paddle and peruse his previous work at leisure.) If anything, Silver age reminds me of another album, that was my first while the band was around for 20 odd years, Social Distortion's 'Sex, love and rock and roll' (2004). Mould has the same melodic punk rock magic and a sneer like Mike Ness.

On silver age one prejudice is taken away directly. Even in silver age it is possible to punk rock loud and with pleasure, as many a band is proving out there. Bob Mould steps on the gas, puts his legs in Status Quo mode and rocks out. There are guitar layers all over the place, left, right and over bass and drums played by Jason Narducy and Superchunk's Jon Wurster respectively. This is a guitar record and Mould lets us know it. Rhythm guitars, arpeggiated, a lead guitar, solo's, muted and almost all at the same time. Layer after layer was recorded to create a great guitar wall of sound over which his rough sounding voice is mixed into the middle there of. Caressed and enveloped by guitars as it were.

Silver age holds ten new songs that are over by 38 minutes. Exactly long enough to want to play the album again. More would definitely have spoiled the effect. As a whole the album is slightly monotonous, minimal variations in tempo and attack, as overall it's loud guitars that dominate. As such the album is not reproducible on stage, as a trio. Because of the relative short play time, the strengths of the album clearly show.

Another record comes to mind, Dinosaur Jr's 'I bet on sky'. As a whole Silver age has more of a pop feel to it. The compositions are more free flowing, invite more to sing along to. Like Green Day, but this album is harsher on the whole, but the quality in the songs do remind me of Green Day's best songs. In which Social Distortion out-did Mould with songs like 'Reach for the sky' and 'Footprints on the ceiling' in 2004.

Silver age does not have one song that totally stands out, positive or negative. It's an album to enjoy as a whole, no matter how strange that may sound in these days of shuffle modes, but that's the way it is.

You can order Silver age here