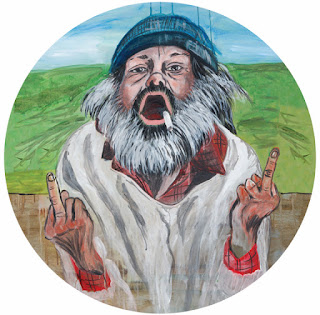 You can listen to Hobo's lament here.

Larry and his Flask is a welcome guest on this blog. Since the band's two shows in the Q-Bus in the spring of 2012 they have featured four times and all, including an interview with Jamin Marshall. Now the band returns with a new EP, with songs in part showcased in the shows. Songs that promised a lot. Let's see if that promise is fulfilled.

Now knowing the band, there is no longer the element of surprise. On the one hand the surprise of the live storm cooked up on stage and on the other how good the band is on record also. In that sense Hobo's lament delivers. The energy and diversity is there, the surprise switch of strings to horns and the general quality of the songs.

Larry and his Flask has this unique quality to mix right out punk, with blue grass and jazzy lead guitar antics. Let's hear it for Ian Cook here! His incredibly fast licks and solos are impressive, good and fun to listen to, whether they are up front or in the accompaniment. This mix of electric with the acoustic does not always go together as far as I'm concerned. It is this mix that makes Larry and his Flask stand out to any other band I know. There is The Hackensaw Boys and Pokey LaFarge in the acoustic realm and Dropkick Murphys -and many others- but no one does it exactly like these guys from Bend, Oregon. Added with the enormous amounts of energy thrown in at live shows, it ought to be a winning combination.

The title song stands out most on Hobo's lament. The song is somewhat slower and less wild, but has this beautiful switch to a great, melodic refrain in which the band let's it rip with the break on. The rough sounding guitar in closing song 'So long' is mixed with a sweet sounding voice and a rough trombone. Without this edge, the song could have come from the 1950s, in a version by Pat Boone or Frankie Laine. 'My name is cancer' is a personal cry from one of the band members. 'Closed doors' and 'Big ride' have that typical Larry and his Flask kind of rocking and swing, with the odd mood swing here or there. While 'Swing' brings out the horns in great form, lending a Mexican mood to this up-tempo song.

Again the cover is graced by a signature painter Randi Hobbs. In a while all fans will always recognise a Larry and his Flask cover. A good partnership this is. A Tarantino like hobo graces the cover of this EP.

Hobo's lament shows the world that Larry and his Flask is a force to reckon with. A great consolidation of where the band is at present. The way the band mixes energy and speed with harmony singing and attractive melodies remains a joy to listen to. Watch out for them as they tour through Europe this spring. This is a show you do not want to miss.