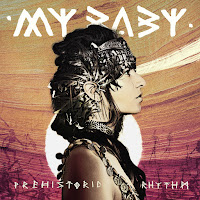 In the past Erwin Zijleman wrote about My Baby on this blog. Having seen the band last year at Haarlem's Bevrijdingsfestival, I had the band noted for future listenings. The set of the trio was exciting and captivating, despite the afternoon setting it had to play in. With the release of its new album, it's time to start moving the caps on the keyboard myself. Excitement is on your way, folks. My Baby is something else. A strange hybrid of many things, but above all the word excitement is what hovers in my brain the whole time while listening. Let me try to explain why.

My Baby is a band from Amsterdam with brother and sister Joost (drums) and Cato (bass, violin and voice) van Dijck and New Zealander Daniel 'Dafreez' Johnston (guitar). Around since 2012, having come out of The Souldiers, the band is ready to release its third album.

The music is an hybrid of blues, soul, dance electronics, funk and sheer energy. A lot of things happen on Prehistoric Rhythm. Not that I like every song as much, but somehow that seems beside the point. Most of the music of My Baby speaks to the heart, to my spinal chord telling me to move and not to my mind. Take the first single of the album, 'Love Dance'. Beats are a part of this song, but not unlike my favourite Warpaint song 'Love Is To Die', there is this organic quality, in this case a violin, that give both songs a unique quality. All I have to do is picture myself in a venue with My Baby playing this song. It suffices to conclude that 'Love Dance' is a great track.

The stage lays some limitations to a trio, the studio does not. It is safe to conclude that the studio itself is an instrument used by My Baby. All sorts of instruments, sounds and atmospheres are incorporated into the My Baby sound. Some of the songs are more experiments in sound than true songs in the traditional sense. Now I'm a sucker for songs, but find I come a long way with Prehistoric Rhythm. All things rhythm will have its origin in the pre history, i.e. times before written records. In other words for each region that day has a different date. The rhythms on display here have nothing to do with those days. 'Ancient Tribe'? A nice title, however without electronics there would not be a lot of rhythm left. Pulsating, deep, like a living creature from ancient fable days it slivers through the song, just like the delayed guitar part that keeps repeating itself throughout the song. Still the blues kicks in with the slide guitar with some less effect on it. Yes, 'Ancient Tribe' is exciting.

'Moon Shower' is totally organic. Dreamy, soft, moving into triphop territory. Cato van Dijck loses her harder edge and sings ever so dreamily. Johnston's guitar is simply beautiful, a folk influence reveals itself. The song is twisted around when it gets a jig like infusion taking the tempo up. The folk side of Jefferson Airplane pushes itself on me, listening to 'Moon Shower'. The ballads sung by Grace Slick. While that band could never have played a song like this in this vein. That's what music does.

My Baby's version of the blues meets De Staat in 'Make A Hundred'. I just love this track. It has power, zest and the blues. Again modern rhythms touch upon the over a century old music from the cotton fields in the Mississippi delta. No one ever figured that the blues could have been played this way. Yet we can in 2017 and do and dance to it till we drop. This is party music 2017 style. Whole clubs will jump and shout when this is played.

What Prehistoric Rhythm shows is that My Baby has a few sides to its repertoire. The over excited one, see above and the soulful one, where Cato van Dijck shows that she can sing with the best of them. Where the band creates a load of atmosphere of soul, not necessarily without rhythm, but full of classy guitar parts and effects creating the right atmosphere.

Prehistoric Rhythm is clearly growing on me and in the right direction. Hopefully I'll get to see the band somewhere in the year. Ought to be a great party. For now I'll enjoy myself with the record.

You can listen to 'Love Dance' here:

or buy the album at the label: