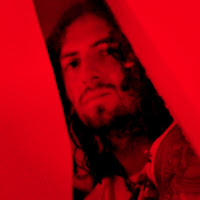 Tim Claridge is no stranger to these pages. You can find him under the name Death Goldbloom, Hymalayan and as guitarist for Natalie Ramsay. You can find the cover picture of Dolemite in the interview we published with him last year. This however is the first time you can find him on these pages under his own name as a solo artist.

Claridge released a solo metal album in 2012, 'In The Company Of Crows'. Dolemite is the second release under his own name, released more or less simultaneously with another EP called 'Every Place In Hell Is Special', that will be reviewed here soon. On Dolemite I find several familiar tunes that have been reviewed before as Death Goldbloom songs, together with a few unfamiliar ones.

Now for those following my reviews of things Tim Claridge it will not come as a surprise that I'm of the opinion that his songwriting skills, playing, arranging and singing all betray a great talent. A talent in need of discovery. Dolemite underscores this once again.

Listening to '66th And Crimson' with somewhat fresh ears I noticed something that I had missed before. Let me call it a Hot Tuna from its debut album sound. That album was pure acoustic blues which this album isn't. '66th And Crimson' has that same laidback, yet same surefire playing Jorma Kaukonen has. That aside, it is a great song. The mysterious atmosphere draws the listener ever closer. The passionate background vocals by Natalie Ramsay makes me listen some more and on top of all that the song takes many a unsuspected turn. Some violins even. It was one of the songs that made me really listen to Death Goldbloom as it now does to Tim Claridge.

The blues is the basis of a lot of the music on Dolemite. Just listen how 'Already Gone' has that light blues touch only to explode into a fiery beast. The devil is around, which is quite common in Claridge's work. Who says that that crossroad in the 10s still lies in the Mississippi delta? It may well be in Vancouver, BC (nice contrast that BC) on 66th and Crimson for all I know. The topic fascinates Tim Claridge that much is clear.

The second album released by Death Goldbloom was called 'A Dirty Dozen Bars'. From that two songs are lifted, 'Iron Tongue' and 'Ain't Got Nothing'. The first is a soft ballad. Acoustic guitars and a piano. Singing together with Natalie Ramsay again. 'Ain't Got Nothing' is a lot louder. Again with a lot of blues infected guitar playing. Most likely the last collaboration with drummer Tomek Kijkowsky, as the band split up before the release of the second album.

With the outro of 'Tokyo Rose' Tim Claridge deprives us of the rest of this beautiful song. Again his versatility comes forward. Slow, sort of romantic, with strings and a piano. Not the kind of song one associates with blues(rock) songs in which the devil plays a role.

The next song is a cover and here is another reason that I had the Hot Tuna association. 'Death Don't Have No Mercy' is one of the tracks on 'Hot Tuna'. This version is turned more into a murder ballad with ever so slow guitar playing. A lot of activity on the lighter strings. The song is turned into a co-self-penned song 'Lead Me On My Way'. Again there is this extremely light touch that moves the song forward ever so slow.

'Lightbringer' is more a sketch of a song that a fully worked out one. The same seems to go for the title track. 'Dolemite' has a dark cello and a hint at lyrics. I would not be surprised if it turns up at a later stage fully fledged and rocking hard. An exercise in mood? I do notice how fine Claridge and Ramsay sing together here again. They bring out the best in each other it seems. My advice is to listen to their recordings as Hymalayan.

Dolemite is an in between EP on route to more new work that is under way. In between means a bunch of very fine songs though.

You can listen to and buy Dolemite here on Bandcamp: