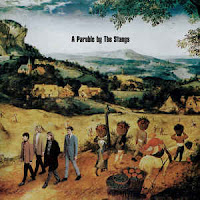 My introduction to The Stangs went through The Kik. The band of youngsters gave an excellent support show in Patronaat, Haarlem on 24 February. My expectations for its debut EP were quite high to be honest. However, to play some nice songs live is one thing, to capture them on a record is two.

Parable is produced by Dave von Raven so that an authentic 60s feel is more than guaranteed. Von Raven runs the PAF! Studio together with his former The Madd band member Marcel Fakkers, where this EP was recorded. An analogue studio. Retro or authenticity? Your choice.

The Stangs is from The Hague, a city with a long tradition of bands since the early 60s. The most notable being Golden Earring(s). The name Frans Krassenburg is a name that does not pop in to my mind coincidentally. Although he was no longer the singer of Golden Earrings for about a year before I discovered the band, with the single everybody seems to want to forget, 'Dong-Dong-Di-Ki-Di-Ki-Dong', it is that iteration of the band that comes by here every once in a while.

The Stangs cover a few sides of the 60s in its music. The band is far from one dimensional. On the one hand it has the spunk of the now former band Taymir, on the other it is far more hard-edged. The innocence of the 60s is on display as well as the harder side of the decade, just before things really got out of hand with addictions, burn outs and even deaths.

Parable is about songs and not the psychedelic experiments. Psychedelia is let into some of the songs. Like a fringe, adding to the mood. And songs happen to be something The Stangs know their way with. Where possible the band moves away from their own drums (Lasse Abeltje Voerman), bass (Justin van der Weijde - Estacio), guitar (Pieter van der Velden), keyboards (Michiel Mutsaerts) line up and lets in horns. Even in the best Blood, Sweat and Tears or Chicago Transit Authority fashion, letting in some late 60s U.S. jazz rock influence. Something that I did not see coming based on the gig. In that sense there are two The Stangs, the live act and the band where Dave von Raven had his way with. Lucky for me I like both.

It all starts with the drums, before the band joins. The organ makes an opening statement straight away. A flute joins (Eline van Esch) before the vocals take over. The Who, West Coast folk rock, Pink Floyd, psychedelia, it is all here. Some horns chime in and it is all over at 2 minutes. What an opening statement 'Forum (Gather Around)' is. More instrumental than vocal but both perfect. I have heard many a retro 60s song in the past years. This one is extremely good. It also has not much to do with what I saw and heard in Patronaat. It takes an eight man band to reproduce this music. 'Forum (Gather around)' certainly is a lot more interesting this way.

Pink Floyd in the early single incarnation comes by 'Look Into The Sun', as does Traffic. The 'Arnold Layne', 'See Emily Play' and 'Paper Sun' references are all over this song. Without being afraid to add a little spice to the song, which is trademark of The Stangs I notice. Most songs have a bite that has little to do with 60s psychedelia, but all with the rock elements that were left around from the years just before peychedelia broke.

The Earrings come by in 'Carousel'. The soft backing vocals, the mood. 'Please Go', 'That Day', 'In My House', it's all there in a great original song. With a chorus I noticed live straight away. "No one ever loves me back"? The English is as interesting as Rinus Gerritsen's lyrics were in the mid 60s. When I think I've heard it all, each time I'm surprised when Benjamin Herman kicks in with his saxophone. What a highlight of this EP. Rough, to the point, sizzling, exciting. What a song!

The organ of ZZ & de Maskers is there, the pop feel of The Motions. What is missing here is what I heard live. The Outsiders are not on this EP. Rotterdam born producer Dave von Raven probably did not allow for any Amsterdam influences on record (and forgot about ZZ?).

With 'Here Comes The King' another hybrid of a song comes by. I'm not even going to start mentioning all the things I'm hearing here. What counts is the song and I love it. (Look for it and you'll find a nice Arctic Monkeys reference hidden there to.) The album goes out with 'Brinno' where every one is allowed to go all out. It's here where the U.S. jazz rock vibes kick in full force. 'Brinno' starts with a Middle Ages sounding flute, after which all sorts of things start blending together. Dynamics are at work, a spinet or a harpsichord is involved and an all out band and horn section. No one even tried to find lyrics as this is just what it is. So powerful, so convincing.

With Parable or 'A Parable By The Stangs' as the cover says, The Stangs have produced a dream of a debut. The only thing missing may be a real smash, e.g. like 'AAAAH' was for Taymir. For the rest there is simply nothing to complain. Every one loving modern music with a strong 60s flavour has its ideal EP right in front of him. Here. One big aural adventure.

You can listen to 'Look Into The Sun' here:

or buy the record here: