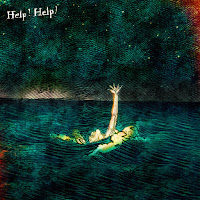 Help! Help!? Moon Moon Moon? Someone who likes repetition is at work here. A Donald Trump fan? My guess is no, but then I do not know Mark Lohmann, just his music. For certain is that he does not like to stick to saying things just once.

Moon Moon Moon is Mark Lohmann, a 23 year old musician from Heerhugowaard. That Lohmann is Moon Moon Moon has to be taken literally. He played and recorded all you're hearing here in his bedroom studio. So far he recorded two albums and an EP since 2014. This is his first release on Tiny Room Records.

There's a lot to discover on Help! Help!. Mark Lohmann produces dark, brooding songs, with undercurrents spelling danger for each and everyone involved in playing and listening. Mark Linkous is not around for some time anymore, but his music released under the name Sparklehorse is celebrated on this album. The next song can be as fragile as Bright Eyes'/Conor Oberst's most delicate songs. Just an acoustic guitar and a dreamy voice. Another explodes in your face like a bomb of noise. The songs can attract or estrange. Be warm or cold and distant. In other words Moon Moon Moon is interesting. This record does not let itself be pushed into one corner.

Let me focus on 'Disintegration Loop'. Far away thunder. A whistling sound, electronic, but it could be the wind in a rusty windmill, pumping up water for the cattle in the distance. Sounds on the veranda of the farmhouse from things moved by the wind. A very elementary sounding and played bass, around which all sorts of electronics are whistling, rustling, whining. Underneath some drumming and guitars. Barely over it the soft, subdued voice of Lohmann hovers. Like a tightrope dancer about to fall off. Yes, it's that same wind. The song is so delicate, yet so much happens at the same time.

When listening to Help! Help! just do not expect the obvious. Yes, there is beauty in most songs (the instrumental part of 'Goodbye, Seabed'!!!). It takes some stamina to find it at times though. Each and every time I listen to the album I find it. Often in a different places as the session before this one. New things are noticed each time. Even in the songs that seem buried underneath the dust of decades that stored itself into the groove of your grandfather's records. Where the needle can hardly work its way through. Even there there is this delicateness, this tender feeling. A yearning for something far away.

Do I toss the album away? It has happened also when I was not in the mood for the darkness surrounding the music. I needed something more lively. Never did I toss the album far. For that it is too good. For that Help! Help! is too interesting and fascinating. As I wrote: a lot is going on here that is worthwhile exploring. And I have and I will in the future.

This is all you need to know, dear reader. If you're intrigued, this is your moment to start listening. Enjoy!

You can listen to 'Disintegration Loop' here:

or buy the album on the bandcamp site of Tiny Room: