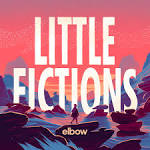 Elbow is a band that slowly grew on me. There's a parallel there. The band grew slowly on the world as well. Together since 1990, it took the band 11 years to release its first full length album. Step by step an audience was won over that grew by the album, easing the band into fame. My introduction was through a compilation album that accompanied 'Oor Magazine' somewhere in the 00s. With that introduction came a listen to the whole album, which I found highly boring. Nothing seemed to happen in the music, except in that one song: 'Leaders Of The Free World' in which so much came together. An anthem, a uniquely great song. With 'The Seldom Seen Kid' Elbow still did not convince me totally. The next step was 'Build A Rocket Boy', which convinced my girlfriend, so I got to hear the album more often. For me it was 'The Take Off And Landing Of Everything' that won me over. That was a slow progression, as slow as the music of Elbow, in its own particular way is. Come 2017 there's the bands 7th album: Little Fictions, the first without their drummer Richard Jupp, the first band change since the inception of the band in 1990.

Lose a drummer and come up with a very percussive album? It seems Elbow does just that. All electronic and programmed. It seems the band had a field day playing with rhythms. Something I notice when listening to Little Fictions for the first time. Instruments strangely enough perhaps when discussing music is something I do not associate with Elbow. Listening to the band, I hear mostly atmosphere over which Guy Garvey sings his lyrics in his typical way, that rightly so has been compared to Peter Gabriel. I am fully aware that by writing this I'm doing the four, now three, musicians wrong in a grave way. Yet this is how Elbow feels to me. Like mist from which someone comes towards me to disappear into the mist again. Where the individual musicians put themselves aside totally for the atmosphere they create as a band. So the surprise with Little Fictions is that the music is so much more direct. Without killing the typical Elbow atmosphere. It seems to be built up differently.

What hasn't changed is Guy Garvey. His voice is omnipresent on Little Fictions. His solemn presence and delivery is like a bellow right on top of the music. There's nothing modest about his singing, where in the past there always was a hint at hesitation in his voice. A little hint at doubt whether he was doing the right thing. The little crack in the armour of the lead singer. On this album he is 100% the frontman. Sounding so self-assured.

The same goes for the whole band in that sense. With the much more open sound all flower as individual musicians. Heck, even the drum machine does. Whether the keyboards take over the lead or the guitar, with a nice delay in 'Head For Supplies', they sound beautifully and central to the song.

So is that all because of the leaving of the drummer, who allegedly always was slow to work with, in combination with the decision to speed up the writing and recording process? If so, I would recommend it to all bands. Fact is that something really has changed and that it worked a miracle for Elbow. The band has taken a new step in its career and not only made it go up a new path. Once again I have to state that the quality of the songs and the album as a whole is of the level that I expect Elbow to be at. Extremely high.

Elbow is not alone in its part of the musical universe. It has become the sun, with all other acts left behind as mere satellites. One of the top bands of the 10s, artistically and commercially. For a band that developed so slowly that is no mere feat.

You can listen to 'Magnificent (She Said)' here: