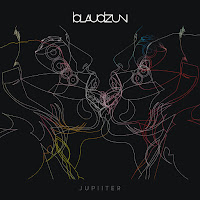 From the bright and colourful to the dark and drab. That is what the cover art of part I and part II seems to suggest. Does that come to light as well in the music of Part II? You are about to find out.

My favourite Blaudzun album is and remains 'Heavy Flowers', that does not change with the release of Jupiter, Part II. Yet, I notice that I like this album a lot and have a load of respect for how Blaudzun has carved out a little piece of the rock pantheon exclusively for himself. The band has a totally unique signature sound that is recognisable instantly. My girlfriend, who forever is lost for names and titles, can listen to a song by Blaudzun for just a few seconds and knows beyond doubt within seconds who she's listening to. Without knowing the new songs being played in our home.

The story behind the Jupiter trilogy will be known by fans by now. Blaudzun, like musicians of the 60s and early 70s is writing new songs and records them while on tour, with his band, instead of locking himself up in Barcelona to come up with new ideas to develop over time and record them, mostly on his own. That ought to lead to more direct songs, more elementary.

It does in fact. Now Johannes Sigmond has a fairly large band around him with a few people who keep switching instruments the whole time, so diversity in sound is not a problem for Blaudzun. Were it not that on Jupiter, Part II the sound is even more uniform than on Part I. So in that sense the album does sound somewhat darker. Exaggerating just a little I could write that Part II is a black hole from which an individual instrument can't escape, caught in the extreme gravity of the imploded star. This is exaggeration, of course, each instrument can be heard. However, the mix hardly discriminates, creating this front of instruments, a wall of sound, where the melody is a part of the wall, not the icing on the cake. A solo like in 'Tear Gun' is at best the mortar between the stones in the wall.

With 'Tear Gun' one of the highlights of Jupiter, Part II is mentioned. But highlight is a very relative notion on this album. Not unlike Part I Part II is of an uncanny high level. As stable as the sound is. It is extremely hard to name just one song, as this is an album. In sound, in execution, in mood. If Blaudzun really worked on the concept as announced, it simply works wonders. The band is extremely tight, there is an enormous focus and a uniformity that lifts this album ever higher. As I wrote 'Heavy Flowers' remains my favourite Blaudzun album. It was my first, that usually explains that fact, but also it has a lightness which makes it a 4,5*, when in the right mood a 5* album. And now comes the true confession. Jupiter, Part II reaches that qualification as well. Having listened to the album several times over the past weeks I can only conclude that it reaches perfection.

As I wrote in the review of Part I, I thought that I would not really appreciate another 'Proimises Of No Man's Land'. With that album I had reached a Blaudzun tolerance. With Part I Blaudzun went for a more direct sound, but did not convince me for 100%, but certainly made the right move.

So now let's return to the black hole analogy. We on earth can still see the final flashes of light from before the implosion, light years away. Listening to Jupiter, Part II is extremely fascinating. There is so much to discover and I do, session after session. All these little melodies hidden in that wall of sound and then there is the signature sound of the bariton saxophone! Jupiter, Part II is a musical adventure that I gladly go on time and again. So whatever the future brings, no one takes this album away from me. I can't wait to listen to Part III sometime this year.

You can listen to 'Press On (Monday's Child)' here: