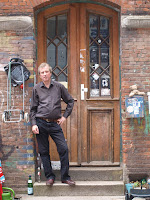 Earlier this week Wo. wrote down his thoughts on the passing away of Chuck Berry. Today Mark Carvell shares some memories on tv shows he watched in the past starring Chuck Berry.


I hope the blog will commemorate another major passing: Chuck Berry. I first became aware of him through The Beatles' covers on the early lps (Rock'n'roll Music, Roll Over Beethoven...) - and then there was a great BBC "in concert" TV programme in 1972 with an unknown British pick up band dong their best to keep up with him (I don't think he ever had a regular touring band). This show gets repeated every now and then because it is a great performance and he was quite a raconteur (though it does alas include sing-along-a-ding-a-ling which was his big freak hit at the time that amazingly passed the BBC censors unnoticed....).

Most of the original rock-n-rollers and bluesmen all came to London around that time to record their obligatory "London sessions" albums with the British kings of blues rock who had done so much to keep them in work. But nobody in the early 1970s was at all interested in the rock'n'roll pioneers of the fifties - except John Lennon! He did a TV show in New York in 1972 with Chuck as special guest. I have an original vinyl bootleg of course but the historic audio-visual recording is readily available these days on YouTube: https://www.youtube.com/watch?v=ULJZbNQRNgU    - They played Memphis and Johnny B. Goode and there's a great interview with Chuck and a reminder how fab, fun and relaxed John was on TV in the early 1970s - and just imagine turning up as audience member for a TV chat show and there's John Lennon playing with Chuck Berry!!!! Not long after that John did his full on fifties tribute album with a photo of him on the sleeve in a Hamburg doorway and the other Beatles running in front past him. I have stood in that very doorway of course (see attached photo)......but that is another tour in another city!