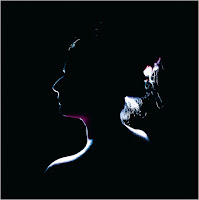 A mysterious cover. A head, en profile, with a light source right behind the head, lighting up only the edges and strands of hair. Creating a photographed cut up like they (used to?) sell e.g. in Paris decades ago. It could be anyone, couldn't it? For now I'll take it to be Jenn Grant.

The album starts just as mysterious. The titlesong is a world of musical influences put into one. Massive (Attack), Lana del Rey, but the first one mostly in the verses, before the more poppy chorus takes over. The song almost seems a hybrid of two different songs. Modern, post-pop, electronics mixed with a weird rhythm moves into the soft flowing chorus, that has a heavenly melody. Where a traditional sounding piano does its utmost to be heard through the synths. Where modernity touches tradition.

This way of working is what shines through for most of Paradise. For this to really reach you there is one major prerequisite: listening. I mean, sitting alone in a room and turn up the volume a little to emerge in the album called Paradise. The only alternative is a headset. My experience is that this is the only way this album works. Jenn Grant forces one to unhaste. To sit down and enjoy her music. The spacious mix allows for the room to breath for that same music. Her voice is found up front with enough echo to make it sound wide. Behind her instruments come forward and leave again. Like in the very organic sounding 'Lion With Me'.

With that the downside of Paradise has also been laid bare. The album doesn't reach me, as soon as 'Paradise' is over, and I'm doing something else. Which is most of the day. The little time I have available to exclusively share with an album, is only for the very best ones. And then Paradise runs short.

Now, when alone with Paradise for this review, something the album without doubt deserves, I am struck by how fine the album sounds. How relaxing the atmosphere is. It makes me unwind and follow the little changes in the songs, the additional melodies that are added to songs. 'I Am A River' is a ballad with Air influences that lets in more and more organic instruments. Each interesting to follow, notice them disappear again or come back.

Whether Jenn Grant takes as big a step in her development as she announces in the bio that accompanies the album, I can't tell. This may be her sixth album, it is my first. What I can tell, is that once 'Paradise' is over, despite that it is the most exiting track of the album, I have the idea that in what follows I hear "the real" Jenn Grant. A singer experimenting with electronics in her harmonious singer-songwriter songs. She has come up with a great, atmospheric album, that is most worthwhile listening to. Where modernity meets tradition in a successful, unforced way, again barring the title song.

So, to come back to the cover, Paradise is a mysterious album. That cover is totally justified.

You can listen to and buy Paradise here: