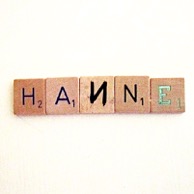 A Hanne sent me an email. Can you listen to my EP? Well, of course. Not really paying attention the first time around I thought what am I listening to? The second time I paid the kind of attention a new record deserves and made up my mind to really start listening.

Hanne is Hanne Peetermans from Eekeren near Antwerp. She sang in a band called Bottle of Moonshine. Together with her new band, named after herself, she recorded three songs. All three are of a lightness that makes me float on the notes as soon as I close my eyes. I'm taken back decades. As far as the 1940s, years before I was born. Music not even my parents played. It is that my grandparents never played music, otherwise I would have learned it from them. Now from an act like the Star Sisters. I am talking about The Andrew Sisters of 'Rum And Coca Cola' and that train song. But let's not get ahead of things.

The three songs on Hanne all have a jazzy infusion in them, yet there's also a pop angle that makes the songs pretty irresistible to listen to. The band laid a lot of effort into the arrangements of the songs. Surprises are all around, as the EP offers so much diversity in the way the songs are approached and the dynamics within them. Hanne had no fear to rock out after a simply heavenly sung section in 'Freddy' or to throw a dark net over lightness in 'Don't Go'.

The EP opens with 'Don't Go', the most jazzy song. Singing almost alone, Hanne Peetermans is not afraid to make herself vulnerable. A double bass and a guitar join her and bolster her voice. During the chorus the sound grows, taking the song in a different direction, mood wise. The harmonies show that this is no ordinary song and no run-of-the-mill band. A double bass solo? Why not. The Andrew Sisters reference is already in place here. Not where the harmonies are concerned though. This is so much darker what happens in the background. An intriguing song 'Don't Go' is. It takes the listener from his lazy settee and tosses him about a bit before releasing him again to his chair. Beautiful, dark, light, sharp, it holds it all and then some more.

Vaya Con Dios is another name that popped into my mind, listening to the handclaps that start 'Freddy'. Here we have arrived at the most poppy song of the EP. Upbeat, in love, floating. The muted guitar notes provided the stones in the water to hop onto from shear happiness. A song like in a musical where the girl seems to float waving her skirt while singing the song. The music is far from modern, yet to different to be part of a musical from the 1950 or 60s. And then the "la la la la" parts starts, ending the song with a full out rocking guitar. 'Freddy' has a few angles that are extremely interesting to follow. What a nice song.

'Round & Round' is the final song. This starts a cappela, Andrew Sisters style. Hanne Peetermans told me that she got on to this blog through The LVE. Not so strange since The LVE's drummer Joes Brands produced the EP and singer Sara Raes does background vocals on the EP. 'Round & Round' is the song where the link between the two is strongest. It has that same subdued atmosphere that The LVE has. The quality to be very direct in a modest way. To that a jazzy atmosphere is added that gives Hanne its own voice and sound.

Hanne is an EP that is so pleasant. The kind that allows someone to escape from every day's reality. To dream for a few minutes of different things and recharge, to face whatever there is to be faced. In my case right now cooking dinner. Oh, does that allow me to put on Hanne again? I guess you're right.

You can listen to 'Freddy' here: