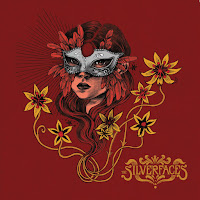 Early in 2014 my girlfriend said, you better watch 'De Wereld Draait Door' as there was a band I'm sure you like. She said that twice that same week actually and both times she was right. One of the bands was The Silverfaces, the other The Future's Dust. There is another similarity. After the two EPs things went quiet. Now, three years later, the Silverfaces return with a new EP (as will A Fugitive, ex- The Future's Dust soon). So let's go and take a serious listen.

What to expect three years after that EP full of youthful bluster, more a demo that a real record? I honestly did not know what to expect, but during the very first listening session I was sucked up and caught without a chance of escape. Again I'm surprised how good a product from this country can be. The Silverfaces have made a giant step towards maturity, without losing a single gram in quality. Jesse Koch (voice/guitar), Martin Scheppink (keys/backing vocals), Javier Den Leeuw (bass) and Nienke Overmars (drums) give it their all on EP II and it shows. In abundance.

EP II holds five songs. I would have wished for a full album, but alas. Let's take a closer look at what is on offer then.

The EP starts with a well-known title. Perhaps not coincidentally the opening song on The Doors' debut album. That's where all similarities end. 'Break On Through' is a ballad, the most easy going song on the EP. But then again, this song seems to have to be reigned in all of the time. The rhythm on the guitar suggests a lot more to come. And yes, the release comes in the second chorus and is reigned back in for the next verse. Masterful use of dynamics here. And then a Hammond sound kicks in for a solo and heaven is reached. I've heard albums start a whole lot less than what is going on here. The end of a song is a bit weird, but the impression of great music was laid down extremely convincing.

'Spoken Words' is louder at the start, but again here it is clear that The Silverfaces have thought a lot about how to structure its songs. Where an instrument is allowed in and when it has to leave the mix, is a choice that is made by the phrase it seems. Again a song where a lot of rock is allowed in, without ever forgetting that melody in most cases is what truly makes someone remember a song.

The single of the EP is called 'The Light'. Upon hearing it for the first time it is easy to understand why. The synth that is added to the mix has a more commercial feel. There are oohs and aahs. The poppy element is matched by some fierce drumming and the guitars play their role adequately. The change of pace is again so well placed, giving 'The Light' a hint at progrock, while at the same the feel of a classic rock ballad is injected, without losing that poppy element that makes this single so nice to listen to.

The poppiness of 'The Light' is matched by 'When You Come Down'. This organ carried song rocks out. The fastest song on the EP in fact. The tempo makes it impossible to sit still. The melody impossible to lose. DeWolff any one? Yes, that comparison is fare game. The song is tighter though. The psychedelic part is thrown out and replaced with a hardrock element with an added pop injected melody.

Another rock ballad ends it all. 'Don't Sleep In The Shade' has the quality in it to became the lighter, ah sorry, it's 2017, the cell phone song of The Silverfaces. I just love that interlude melody. Everyone from Golden Earring to The Who right up to The White Stripes have played rock ballads like this and this band of youngsters from Amsterdam just add another great one to the roster. Everything falls into its right place in this final song. So: I'm not talking Foreigner ballads here, mind. This is the real thing. So if I may suggest the true single of EP II?

It took The Silverfaces three years to come over the shock of all the attention in 2014. I can only hope that there are some more songs in the bag already. Otherwise it may be 2020 before we get to hear more. From what I'm hearing, now for the second time, this is a band that trots some well-trodden paths, but in a highly superior way. Let the good times roll, because that breakthrough may just be around the corner.

You can listen to 'The Light' here: