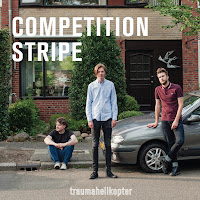 It's been quiet for a while around the trio from Groningen. The two previous albums all featured on this blog and a show at a festival in Wateringen was reviewed. After that things went quiet until the fall of 2016. traumahelikopter gloriously returns with an album in which it expands its horizons slightly, without losing the core of alternative, punkrock and garage rock which is the basis of its songs.

The band manages to incorporate a poppy element in an uptempo, sixties kind of way that I had to get used to for about two spins. Soon after the new addition settles quite nicely. The sound is just a little lighter than on the previous two albums of which the first obviously was the loudest. The fate of all things new, even if it perhaps in reality it isn't that much different.

Over the past years the band has not been laying idle it seems. Competition Stripe is released in Europe and the U.S. which shows that more people than just me believe in this band. Of course, just joking, but it is another sign that alternative music from NL is getting better and better over the past years and is released in other countries more regularly.

The trio, in the slightly alternative line up of two guitars and drums, has its influences. Jesus & the Mary Chain is certainly one. Leave out the relentless drilling sound of the guitars and the songs of 'Psycho Candy' show through in 'Negative Feelings'. One of the more psychedelic tracks on Competition Stripe, with a hard edge solo. At the same time I can mention The Velvet Underground of course. Madness and all show through as the song progresses. No matter how much I enjoy 'Negative Feelings', I am glad that other songs have more positive vibes.

As I wrote traumahelikopter has found its way into the 60s good and well. The 'Nuggets' and 'Psychedelic States' compilations have been listened to at least once. There are several songs on these albums that could well have been inspirations for Competition Stripe, but in the end the VU comes to mind most. The elementary rock of the title song, the guitar playing, it spells Reed-Morrison-Cale. There's nothing to complain when the guitars and drums explode into an interlude, followed by some fine piece of singing.

The album starts in a totally convincing way. It simply explodes into my face. A simple two chord progression played with aggression and zest. 'Sleep Tight' holds all that makes rock music so exciting to listen to and to be present at. The fact that in the end the song that starts so basic holds so many ideas in it, seems to work against it. Then the lead guitar solo of the song bursts loose and all is saved. It's savage, it's brutal, it's brilliant. What a song.

Traumahelikopter manages to hold on to that level of energy like its the most normal thing in the world. My first impression that the band had stepped back a little, is something that I can't recognise after several listening sessions. Where was I with my mind? My best guess is with Canshaker Pi, as I was listening to that album at the same time. So it's for the best I put Competition Stripe on the backburner for a few weeks at let it percolate into my brain a bit more slowly. That way I hear the subtleties and the qualities of a slowstarting song like 'Somewhere' much better. The song explodes into this delightful chorus in a U.S. indierock kind of way.

There's simply a lot to discover on Competition Stripe. traumahelikopter has come up with a great follow up to its first two records. This album may have been a while in the making, but the wait was worth it all the way. The only way is up it seems, gentlemen.

You can listen to 'Sleep Tight' here: