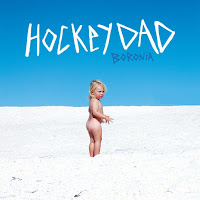 And so we aim the spotlight 'Down Under' once again. Hockey Dad is duo from Windang, consisting of drummer Billy Flemming and singer/guitarist Zach Stephenson. Together they cook up a modest storm of rock. Boronia is the band's first full length album after releasing songs since 2014.

Another duo in rock? How many more can this world stand? At least one more it seems. This form of rock that was basically unthinkable before The White Stripes, has become mainstream in the 10s. Hockey Dad is no exception. Its music is neither. Anyone with an ear for music made in the past decade will hear and recognise what is going on on Boronia.

Is that a problem? No, as 'Can't Have Them' is a nice opening song for an indie rock album, a few things stand out. Like the energy with which the song is flung at the unsuspecting listener. Nothing is left to chance in this song. Flemming covers all the nooks and crannies of the song, filling them expertly as a drummer in a duo should. On top of that there is a lot more than just one guitar. I'm fairly certain that there's a bass involved in the song and there are a load of overdubs of additional guitars. Stephenson delivers his vocals with an attitude, inviting people to sing a long in the choruses.

Having never heard of 'Boronia', I decided to look it up and came up with (thank you Wikipedia) a Melbourne suburb and an Australian plant. So have your choice. The music of Hockey Dad is described as surf rock in the band's bio. I beg to differ. The two members may be surfdudes, but the band's music has nothing to do with the classic surfrock and the twangy guitars associated with that sound. The more with the enthusiasm of the classic garage rock of the 60s in a 10s incarnation. A 60s riff in the single 'Jump The Gun', notwithstanding.

Hockey Dad delivers in energy and enthusiasm. If the band is able to translate the energy already caught on record to the stage, each gig ought to be a big summer splash party despite the season. That energy is what makes up the sum of Hockey Dad. On record the band adds some subtle details here and there, which will be hard to recreate live, if they play in a duo setting that is. The subtleties are in the double lines played in 'I Need A Woman', for example. The deep bass notes are matched by the higher end double tracked guitar playing full chords. One of my favourites on Boronia by the way.

Boronia is not perfect. Hockey Dad still has to learn and grow, acquiring mileage by playing more and honing its skills. In the meantime here is a fun debut album that shows pop feel and rock potential in abundance.

You can listen to and buy 'Boronia' here: