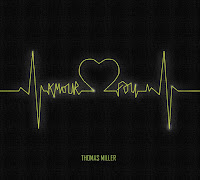 The first time I heard of Thomas Miller was when he sent me the link to a single by Glaswegian singer Dee. Now he returns on my musical radar with an EP of his own called Amour Fou.

It was the title song that draw me to the EP initially. A mysterious song, full of atmospherics, with a faintly familiar piano sequence of notes. Like in the rest of the EP Thomas Miller works from a dance basis, but where this usually turns me off quite fast, exceptions allowed for, Miller manages to come up with an undercooled blend of dance, pop and enough hints at new wave and lighter versions of rock in the guitars to make his music fairly irresistible to me. One way or another he is able to take elements of 80s synth pop, which I pretty much abhor for over 30 years now and incorporate it into something quite attractive. Although not unique for the 10s Amour Fou is a fine hybrid of a record.

As I wrote the title song is mysterious. The piano that opens it, brings and I'm still not sure, but I think Linkin Park to mind. Or is it 'Outside' by what's its name? Let me check out later and focus on Thomas Miller. Behind the piano there are rhythm atmospherics going on. The kind that really speak out when listened to on a headset. Dee, who happens to be Thomas' sister, joins on vocals. The record is a family product as both are credited for the four songs. Later on in the song a guitar is added, making the song a little darker. The song is a contradiction. On the one hand it is ultralight, like a feather in the wind, while on the other hand it is as heavy as a Buddhist monk in full Aikido swing. Intriguing that sort of thing is called. 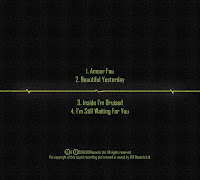 Enter the 80s with 'Beautiful Yesterday'. The light keyboard/synth sound with a delay function here and there is reminiscent of everything China Crisis, Howard Jones, etc. The digital drums add to the whole. The singing is as modern as it comes though. The song shows that Thomas Miller is not the best singer in the world, but he knows his limitations so well, that he delivers the song in exactly the right way. Add the voice of Dee in the backing vocals and things really work. When 'Beautiful Yesterday' receives some more dynamics by the addition of more instruments towards the end of the song, the boost lifts the song and makes it even more attractive to listen to.

Dee leads the singing in the third song, 'Inside I'm Bruised', before Thomas takes over. Again mystery prevails. A softly pulsating synth drives the song forward. A guitar weaves itself around the light beat and the pulsing synth. Fascinating strings of notes are played that give the resigned sounding song a ray of light and hope.

The loudest song by comparison is 'I'm Still Waiting For You'. It has a firm beat and rhythm guitar. Although the song is far from exuberant, it is certainly danceable. In a strict way that it. Again the mood is rather dark, but that does not take anything away from the hybrid dance, rock and new wave atmosphere 'I'm Still Waiting For You' has over itself. Somehow I want to start singing 'A Forest' and that can't be a bad thing.

Amour Fou is the first work I've heared from Thomas Miller. I can't say that the introduction has led to a crazy love affair but I'm certainly interested to get to hear more of his music in the future. So let's be friends instead. Let me end with a compliment for the artwork by Kirsty Fraser. Really well done.

You can listen to 'Amour Fou' here: