After the death of Keith Emerson an e-mail conversations started between Wo. and two gentlemen from the U.K. who he had got to know professionally. Over time they found out they shared a passion for music. The conversation on Keith Emerson's passing resulted in a post on this blog. Now that Greg Lake has also left for that great gig in the sky, Gary returns to the topic one more time and sings his praise for ELP.

“The show that never ends” has ended. The world has just lost two-thirds of the most important musical group of the rock era. Keith Emerson, composer of rock, jazz and classical music capable of moving the soul and in my mind the greatest and innovative keyboard player of the last century, suffering from depression and debilitating nerve degeneration, took his own life. Greg Lake, whose beautiful, rich and naturally sonorous voice was honed to an unsurpassed level of tonal accuracy and range and whose lyrical compositions could paint pictures of astounding beauty, succumbed to cancer. Thus, two-thirds of Emerson, Lake, and Palmer have left the stage, never to come back again in this world.

As we are all conscious that 2016 has been an annus horribilis for the music world with the passing of Bowie, Prince, George Martin, George Michael, Leonard Cohen, Glenn Frey…. the list is not exhaustive. These artists are important to our culture and music and tribute should be made, however some of those we have lost do not seem to have been given the prominence they deserved. In particular I point to Keith Emerson and Greg Lake.

Now only Carl Palmer, classically-trained like his bandmates, possessed of the very highest skill and raw talent (again, like Keith and Greg), and probably the most open and approachable of the three, is still performing with another great but very different band, Asia, and carrying on with an ELP Legacy group to remind us of what we have lost. 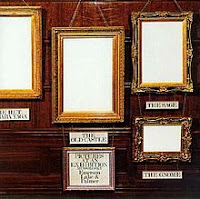 Rock critics never liked ELP, tossing ignorant slights like “bombastic” and “overblown” at them as if composing and performing to one’s highest aspirations were mere “pretension.” But the critics’ sniping was in its way recognition of the glory of ELP: This band did not aim merely to please an audience—though they did seek to please, including through sometimes circus-like theatrics. Nor did they aim to be “relevant” or to be “authentic” in the vulgar manner so prized by the truly pretentious half-educated who demand validation for their own inclinations and experiences. ELP sought to make art.

For a group of musicians playing electro-mechanical instruments to set such high expectations seems ridiculous to many. The genre of music ELP helped create Progressive Rock (a much maligned label that really just denotes innovation and eclecticism) seen as being merely self-indulgent in its fascination with electronic tones and futurist ideology. But ELP, whatever its alleged excesses and whatever the ‘political’ views of its members, was about music, not ideology. ELP worked to live their vocation as composers and musicians. Whether in the organic, rocking, drum-centric “Tank” from the first album or in overtly cerebral fantasies like “Pirates” from Works Volume I and “Karn Evil 9” from Brain Salad Surgery, Emerson, Lake, and Palmer were “all in.” They got joy from extending themselves as musicians and from layering rhythms and melodies in a fashion I think Bach would have approved. At their best, Greg Lake’s lyrics (often with the cooperation of Pete Sinfield) evoked other worlds, drawing pictures with words and tones and imprinting them on the ears and minds of the listeners. This is most obviously in the superficially self-explanatory “Pirates.” But it is just as true, for example, “Karn Evil 9, First Impression” (especially the less-known Part I) in which words and music combine to make the listener identify with a hero whose virtue and pride lead him into a fantastic, nightmare world in which spectacle and ambition destroy humanity—spiritually by the end of the First Impression, then literally by the end of the work. “Karn Evil 9” is not overblown, it is genuinely and intentionally music on a grand scale, combining classical techniques with multiple, interlacing rhythms, and outstanding polyphony to immerse the listener in a web of sound that for a time creates its own reality.

“Counterpoint” is a concept (not to say a reality) little understood among most rock musicians and even less in today's commercialised chart music; but it was crucial to ELP’s ability to produce such awesome sounds that made sense at a level frankly higher than can be achieved in most blues-based music, with its emphasis on a single, simple melody underscored by rhythms deeply rooted in a single time signature. At their ‘usual’ best, ELP performed according to a vision of rock music as rooted in the European based classical past rather than in the American Blues roots of most rock music. They produced both direct classical adaptations (Aaron Copeland’s “Fanfare for the Common Man” being the most famous) and original compositions that likewise combined modern rhythm and technique with melodic sophistication to create genuine art—pieces of beauty capable of affecting the ‘souls’ of listeners.

As with all of show business, one could pick apart personalities and motivations, and second-guess various decisions that, for ELP, meant lost opportunities to make great music, as well as some music that simply was not up to par. Yet even misconceived albums like Love Beach include gems (Gaspar Sanz’s “Canarios” is one of ELP’s best classical adaptations) and ELP seldom failed when they were true to their vision. 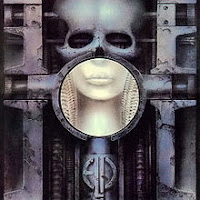 The saga of these three men after the band’s original breakup in 1978 is long and tortured. It includes several near-reunions, including a different ELP album—Emerson, Lake, and Powell. With all due respect to Cozy Powell (who was a great rock drummer), this might have been a classic album had it included Carl Palmer’s talent for arrangements and his astonishing ability to play the drums as a lead instrument. And there were attempts to break into the pop realm. But, where groups like Genesis had managed the transition (for good or ill!), ELP, 3 (a brief grouping of Emerson, Palmer, and Robert Berry), and solo efforts did not with maybe the exception of ‘Fanfare for the Common Man’ and Greg’s ‘I believe in Father Christmas’. The reason was simple: these men thought too big.

Keith Emerson came to attention with the Nice in the late 60’s and Greg Lake with the original King Crimson both bands have a prominent place in Rock history. 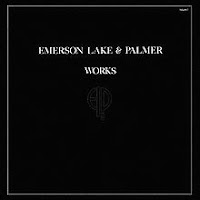 Carl Palmer could divert his talents into the percussionist pyrotechnics of Asia, but pursuit of popular relevance, once the spell of stadium concerts backed by orchestras wore off, required a more fundamental rethinking for Emerson and Lake, whose classical training and frame of mind became insipid when compressed. Emerson in particular (and much to his credit) could think neither univocally nor in terms of the commonplace. ELP’s music was larger than life, conceived in terms of alternate realities. To make it anything else was to make it a bad imitation of something less real than itself.

This is not to say that ELP was strictly an “art” band. The underrated Works Volume II is filled with jazz influences and some of their best music. But what made ELP different from other rock groups was not that it was “progressive” (and that term has various meanings to differing people), rather, it was that the members viewed their vocation as creating things of beauty. Such a motivation is a rare gift; to have it shared by three such brilliant musicians was a once in a generation gift for us all. I make no apology for stating this, as I believe that the works of ELP have been greatly undervalued and unrecognised by our society

ELP has left us more than half a dozen masterworks in the form of albums—not just mere songs, but entire albums with beginnings, middles, and ends that take the listener on an astonishing aural journey. Not all of ELP’s albums are masterworks, though even the least of them include important pieces. But the original Emerson, Lake and Palmer, Tarkus, Pictures at an Exhibition, Trilogy, Brain Salad Surgery, Works Volume I, Works Volume II, and, if I may, Emerson, Lake and Powell and even Black Moon, constitute a body of work valuable for itself. They provide experiences enriching to the ‘soul’ and show just how much can be accomplished with acoustic, electro-mechanical, electronic instruments and the human voice when the goal is something more than “keeping it real.” 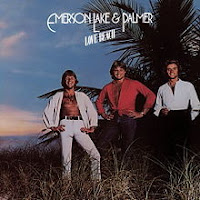 For me the work of ELP has been a very large part of my life; musical, emotional and intellectual. The passing of two-thirds of ELP has closed an important chapter in my life; no chance of seeing ELP play live again or hear a new piece of work. There have been some obituaries that have paid tribute to Keith Emerson and Greg Lake in the UK, but nothing that in my view that paid a true acknowledgement to their outstanding work and their influence on many other musicians and ‘fans’. I watched with interest the London New Year celebrations. In particular the musical accompaniment to the firework display as this promised to pay tribute to the great musicians that we all lost in 2016. I was bitterly disappointed to find that Keith Emerson, Greg Lake or ELP was unrepresented, more so as they are all born and bred in the UK.

In conclusion, I wanted to state that the work of ELP, collectively and as individuals has been shamefully unrecognised. Not because I am such a great fan, but objectively their work was truly ground-breaking and innovative, capable of huge emotional charge yet technically excellent. ELP could offer the height of intellectual challenge or present the greatest of spectacular showmanship. Their like will probably not be matched or surpassed again… for that I am truly sad, however they will live on every time I play an album or one of their pieces goes through my head.