Hear The Lions Roar. Half Japanese 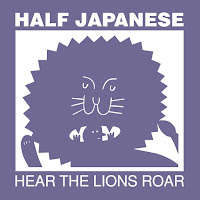 What to think of Hear The Lions Roar? I tend towards pointing you towards the artwork of the album. The somewhat childish, yet very well stylised lion on the front sort of tells a lot about the music. Somehow I have a hard time taking the music totally seriously. The fact that the Toy Dolls come to my mind while listening to Half Japanese is telling. A punk band that plays great, but through the voice and the topics being sung about hard to take seriously. Let's delve in deeper and see if this first impression is a correct one.

With the accumulation of listening sessions several things start to fall into place. The psychedelic tendencies lacing the music shine harder and harder. The muddied sound lets through more and more details, that show that a lot of attention went into the details of recording (or that musicians were given a free hand to improvise details in the whole). There's no big plan behind the music. It goes where it goes without being hindered by any conventions. Hence there are songs that seem to be built around and above a chugging rhythm ('It Never Stops') and songs that take a famous chord progression and rhythm like 'Everybody needs somebody''s over which another song is played ('Of Course It Is'). In other words there is a lot to discover on Hear The Lions Roar.

Until I received this record late in 2016, I had never heard of the band Half Japanese, as far as I'm aware. Hence my surprise when I found out that the band is around for over 40 years, having started in 1975 by the brothers Jad and David Fair. Half Japanese released its first record, the EP 'Calling All Girls' in 1977. In the 80s David Fair left the band, that Jad now leads for three decades. A rather bizarre claim to fame is that Kurt Cobain was wearing a Half Japanese t-shirt when he took his life. In 2017 the band is rather active after a long recording hiatus. Hear The Lions Roar is the third album since 2014 to be released.

The more I listen to Hear The Lions Roar the more the album grows on me. It has so many different sounds and songs that I keep being reminded to truly listen to what is going on. Of course I heard something in it from the start, otherwise I would not have invested the time. But I honestly did not know where things would go between us.

The switch from the ballad 'The Preventers' to the title song is such a pleasant one. Having been surprised by a slow song of a good quality, the band goes out into a carnival fair sort of song that twirls and reaches out. When the horns chime in, the party is complete. A memorable psychedelic outing it is.

The music of Half Japanese walks a thin line. 'Do It Now' has a talk/sing vocal. So I start listening to the music more intently. A fierce drum drives the song forward, with outings on the organ and the guitar which makes the song extremely lively. It is not hard to find the Elvis Costello, Joe Jackson, The Rumour, Ian Dury, The Stranglers sort of influences in this music. There's always a high sounding organ. The days the simplicity of punk was left behind, while the energy was still there. Half Japanese plays with these influences, makes it something its own and then adds the typical voice of Jad Fair.

That is not the whole story. What the band also does, and here I start to repeat myself, is add something interesting in the whole of the music. Its love for this music shows in those little details that are added. No matter how murky the whole at times may sound, the mud is full of little shiny pearls that were definitely not thrown in for the swine. And that is what endeared me to Hear The Lions Roar. This is no Toy Dolls, believe me. It is only in the final song, 'Super Power', that simply goes on and on without going anywhere, that I have heard enough. By then I have no complaints left. Hear The Lions Roar has convinced me: Good record.

You can listen to 'The Preventers' here: