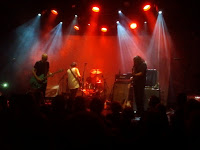 How many times have I seen Bettie Serveert play since around the late 90s? I can't recall. Many a time, once even totally unplanned at the spur of the moment. There were several great shows among them, but this one? The band played blisteringly good. With so much power, energy, joy and good old fun, that it started to dawn on me that had this been a band of youngsters at the start of their career, no one would have been surprised. It's the lines on the faces of the band and a lot of the audience, that pushed the band enthusiastically onwards, that belied my thoughts.

The evening started out with a band called Reiger ("Heron"). Unfortunately I came in a bit later to a packed Patronaat and missed out on some great indie-rock songs it seems. Three songs were all that I got to digest. Reiger also is not a young band, 40 somethings were on stage with a younger drummer, replacing the injured drummer. Hearing the songs for the first time it is hard to really form an opinion, but from what I heard, I had the impression that Reiger is an ideal warming up band for Bettie Serveert. Some great interaction between the guitarists and songs that gripped me without any hesitation. 'EP #1' went home with me, so watch these pages if its as good as the few songs I heard. 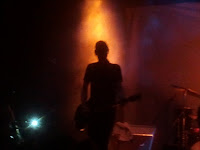 The show opened with a video of the band on route to Haarlem and behind the scenes during which Peter Visser walked on stage, picked up his favourite guitar, the one with a 'P' on it and started to play with his stomp boxes. Noises zoomed, plopped and meandered around the venue. Drummer Joppe Molenaar joins and hits this hard, fierce rhythm. Bassist Herman Bunskoeke steps on stage, straps on his guitar and joins the rhythm. When singer Carol van Dyk makes her entrance, including her bag, thank you HareD for pointing out this detail, the noise turned into a song.

A lot of the songs of the latest album 'Damaged Good' came by. Bettie Serveert can be truly proud of this album in my humble opinion. The songs added to the live show that was interspersed with many a favourite and/or album track from the past. 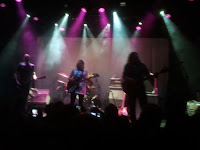 I don't even really care which songs the band plays. What I love first is the energy that always comes from the stage. A drummer who seems to give more than he has in him. His face contorted as if each single next hit could be his last. The cool of the 100 kilos bass player who is in his corner, doing his thing. Playing great lead lines or elementary supportive notes, adorned with an occasional smile. Peter Visser who is one with his guitar and stompboxes, playing like there is no tomorrow. Over this all Carol was singing great. I truly believe that Bettie Serveert's singer is still getting better. At the same time she keeps things together with her tight rhythm guitar playing.

About four years ago I wrote on a show in the, now defunct, LVC in Leiden that Bettie Serveert was on fire. So what was the band this evening in Haarlem? How to describe this enormously energetic show? It must be something more than that. The smiles on stage said it all. I mostly saw the back of heads in front of me, but surely one big smile must have radiated back from the floor to the stage. Radiated? O..k., nuclear then it is.