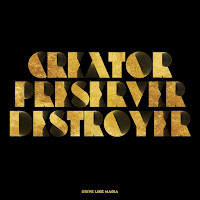 Another band that does a three EP release before releasing the full album. Drive Like Maria has featured on this blog with all its albums to date, although the first album 'Elmwood' was discovered better late than never by me. Creator Preserver Destroyer proves to be a great third addition to the band's oeuvre.

The first two EPs were reviewed last summer in one go. Despite this I will treat Creator Preserver Destroyer as one whole now that the EPs are released as an album. The months past allow for a little refreshed ears as well.

It's been over four years that Drive Like Maria released its eponymous album. Actually in the first half year of this blog both albums were reviewed. Whatever the reason for this long wait, it was worth it. The slow start of opening song 'Nighthawk' put me on the wrong leg totally. The opening is slow, muddied, sluggish. The eruption that takes the song off, is powerful, strong, rock with a capitol R. It made me realise what I had missed in the past years. Drive Like Maria is band I cherish, but sort of forgot all about over that same amount of years. The loud riffs splatter all over my ears in the second part of 'Nighthawk' and the band has me where it wants me to be: in a rocking mode.

This is the basis of Creator Preserver Destroyer. Alternative rock with a hint here and there towards Queens of the Stone Age and other desert rock acts like Masters of Reality. Drive Like Maria keeps it a little more down to earth soundwise though. From there room for more relaxed or better, slower songs with a lot of inner tensions is created. 'Will We Ever' is a good example of just that. The fourth song on the album after three strong rockers. The tempo is off, the guitar plays just a few notes, the threatening mood is all in the atmospherics surrounding the basic trio of guitar, bass, drums. Like a monster about to break free from its dungeon the song comes out of my speakers.

So here are already two examples of how Drive Like Maria tames the dynamics on this album. Within songs they are able to restrain and release and between songs as well. It balances Creator Preserver Destroyer in a great way. Take the rolling rhythm guitar in 'Sonny' that is allowed to go full out in the chorus. The effect is spot on to make an interesting song.

That the album was long in the making comes forth from the information coming with the album. Drive Like Maria started working on the album in 2014 in its studio in Italy. Working with the three of them during the creative process spelt a new phase in the band's career. Friends came by to play or sing along here and there. Something that can be heard very obviously in the great song 'Tiny Terror'. The saxes of the Italian streetband Badabimbum, the band's neighbours in the studio. 'Tiny Terror' has a perfect build up. Talking of great rocksongs, then we have a 2017 example right here.

After another up-tempo rocker, 'Saints', the tempo goes down for the opposite: 'Sinners'. Again Drive Like Maria comes up with a ballad that is the kind that crawls under the skin. De Staat comes to mind in this song, if I mentally strip away all that sets De Staat apart from most every other band that is. The two are very different bands, even if Jop van Summeren takes over the bass from Nitzan Hoffmann on some songs.

In 'When The Lights Go Down' the mood really goes down. The piano of Remko Kühne leads Bjorn Awouters through this real ballad. It is also the only song that Drive Like Maria lost me. The song is sensitive, but just not interesting enough, I'm sorry to comment.

The tempo goes up again and with 'Taillight' my attention is back in full. It goes back down with the atmospheric intro of 'Forget'. After that the band kicks in with a menacing rhythm ending Creator Preserver Destroyer in a grand style.

Then it is all over with the option to push repeat, something I've done several times recently. Drive Like Maria is back with an album that has style and power. Nothing to complain about.

You can listen to 'Saints' here: