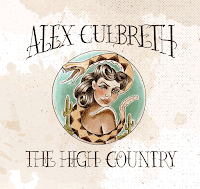 This blog was only days old when The Parlor Soldiers featured, followed soon by an interview with Alex Culbreth. The duo, Karen Jonas is the other half, is no more but with a new record by Alex Culbreth and one by Karen Jonas on the slate the world is double as good.

In The High Country Culbreth remains close to his roots. The album has a title that tells it all. All sorts of traditional music comes by, bluegrass, blues, country, alt.americana and roots. A lot of different styles come by, making The High Country a diverse album. The ever rougher voice of Alex Culbreth makes the listening a deeper experience.

The album kicks off with a song that could be on the new album of The Hackensaw Boys, out due in April. The up tempo bluegrass of 'Corn Liquor' is fun, in your face and over before I realise it's started. The qualification 'in your face is appropriate for most of the album. Even when Culbreth is just field hollerin' and footstompin' in 'Stagnant Waters' he is'literally standing right in front of you in the way the song comes at you.

Some of the more bluesy songs remind me of Hot Tuna's first album. The atmosphere is the same, Alex Culbreth even sings like Jorma Kaukonen in 'Sugarmama'. The fact that there is a violin there instead of a harmonica is trivial. The intention to play pure, acoustic blues music is the same. The effect also. Next he does a Gene Vincent (or Buddy Holly) in 'Tear It Up', in a successful way I might add. A real fun song.

In 'The Mustache Ride' the violin of Eddie Dickerson gets a spotlight for the first time. The violin is one of the gems that we get for added value on this album. Something to cherish. This song is one of the absolute highlights of 'The High Country'. The enthusiastic groove says it all.

Listening deeper into The High Country I notice that the album is much more a solo effort. A few songs are just a voice and a guitar. The moment I write this a band song gets going, 'Choke That Chicken', another bluegrass song. I want to go back to 'Weather The Storm' though. In this quiet song a maximum effect is reached from a minimum of sound. The perfect singer-songwriter song? It may come very close.

What I miss on The High Country is Alex Culbreth's ownness. The album seems more like a collection of emulations of his favourite music than a real Alex Culbreth collection of songs, like e.g. 'Heart In A Mason Jar' was. Of course that could be intended, I don't know. Having said that, the emulations succeed successfully right up to extremely so. So there is no reason to complain, just a feeling that I have that needs mentioning.

It all ends with a banjo in 'Vagabond Blues', another downcast song. There's not a lot of joy on the album. A lot of whisky is though. 'Vagabond Blues does set a capstone on The High Country though. Again simply a few chords and a voice with which Alex Culbreth does what he is good in, capturing his listener, me and drawing me into his world. A world that doesn't seem to allow a lot of smiles, but at times that is just fine for me. The remedy? Turn the record on again and get a smile on your face by listening to 'Corn Liquor' again. Heck, he even sings "a pillow of laughs" or does it just sound like it? He also sings "It's going to be the death of me", so out goes the pillow and the laughs. if they ever were there that is.

Listening to the album once again it deepens the experience and the songs start to settle in me. The conclusion is as evident as deserved: a very interesting, diverse but most of all a good new album.

You can listen to and buy The High Country here: