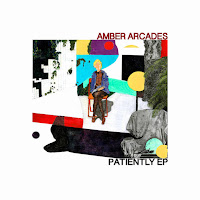 In 'NRC Handelsblad' I read an interview with Annelotte de Graaf of the band Amber Arcades. Never heard of either before, but read about a woman who disbanded her band, packed her bags and traveled to New York to live her dream and record her songs. No matter what kind of music this would turn out to be, the story is attracting enough to give Amber Arcades a listen.

I found two songs on Spotify, the extremely neurotic and busy 'Turning Light' and the 60s ballad 'Right Now'. Both are extremely addictive songs I found, released in 2016, but not part of this EP that was released in October 2015.

In fact 'Right Now' would have fit in totally, 'Turning Light' certainly does not. Amber Arcades is a band, or better Ms. De Graaf is the band with help from hired hands, that fits in a long tradition of bands that are influenced by the soft side of The Velvet Underground. From Spanish Hinds earlier this year, to Belly and due to the dreamy female vocal even earlier in the 60s with The Shangri-Las.

The music on Patiently is elementary. At heart it is Annelotte de Graaf singing and playing her guitar. With some help on percussion here and there. All very minimal. The vocals carry the songs and they are dreamy, as if looking at something beyond the horizon and certainly not something present in the recording studio.

No matter the obvious quality it does make me ask myself what would happen here when a real drum would kick in, a bass would come alive and a keyboard soar? That would make Patiently a totally different EP. For the EP this is quite alright, but for a whole album there may be a need to make some songs come alive. A hint is given in 'What A Heart Can Contain', the song that comes closest to a mix of The Velvet Underground and a light version of Veruca Salt.

The next song on the EP is 'Constant's Dream'. No more and no less than the price song on Patiently. De Graaf's voice, her harmonies, her guitars and a tambourine. That's all she wrote. What a song.

De Graaf works as an immigration lawyer next to her band. With the large influx of refugees and the quality of her songs, things may get busy for her in 2016. The comment made in the mentioned interview is a correct one: can an artist make a decent living in 2016? I just downloaded the EP for free, but spent some time writing a review in return. Something she can't make a living from, as I can't. So for now having a job is a safe thing.

In the meantime I'm enjoying these soft songs on the brink of 60s ballads, indie and pop. Another EP from a Dutch artist that made me curious for what is going to follow.

You can listen the Patiently and buy the EP here:

You can listen to the two other mentioned songs on Spotify.
Gepost door Wo. op 10:43