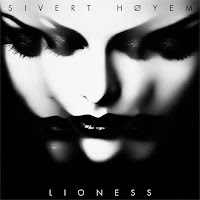 Madrugada was one of my favourite bands of the 00s. Ever since I heard 'Electric' and not much later 'Industrial Silence' I was sold. The dark voice of Sivert Høyem and the mysterious music, like Chris Isaak in cold and dark Arctic days and nights, and more much more, were very addictive. The bond grew by the album and live shows and  then all of a sudden I saw the dark pages of 'Madrugada' and the in memoriam for Robert Burås. My first thought was it must be for his father, but some googling confirmed my unrest. An unrest that started with all the black pages in the cd booklet. The Madrugada guitarist was dead for half a year or more, without the message ever reaching me.

Høyem continued with what he was already doing during Madrugada, recording solo records. The first one I really liked was the previous one, 'Endless Love'. Everything seemed to fall together, just like it does on Lioness. This is the album that I want to hear and what could have been the 2016 Madrugada album had the band been able to continue.

Lioness is an album full of unquenched desire hidden by a façade of male superiority. A desire for life, for simplicity, for being less restrained, for things normal. That is the feeling I get listening to Lioness. So much seems to hide underneath the surface of Høyem's singing.

Writing that Sivert Høyem is Madrugada is equal to lying. Robert Burås is not here and it is his guitar playing that made up a large chunk of Madrugada's sound. The delayed way of playing, the endless echo and the almost sinister emptiness is all missing on Lioness. Sivert Høyem has his voice and from there creates music that makes him his own man. The result is music that is less exciting for the reasons mentioned above, but has its own beauty and more importantly quality.

From the very first song the fans are treated to superior ballads. Ballads of a fine and intrinsic beauty. Topping it all is the duet with Norwegian singer Marie Munroe. Together they capture a mood that is quieting and just begs listening. The balance between the two voices is perfect and exceeds Høyem's duet with Ane Brun of years ago by far.

One of the influences I hear in a song like 'The Riviera of Hades' is Lee Hazlewood. Not just the dark voices. Late Lee may win that, but the way the song is arranged and flows through the chord changes. No matter how strange 'Some Velvet Morning' may be, I'm reminded of that song here. The songs have mystique in common and something otherworldly.

There I have mentioned the one strong point of Lioness. It has its own feel, mood, universe if you like. It has all that without being one dimensional and that makes it special. There are so many albums that are not able to remain consistent or become a little boring, without a course changing song. Not Lioness, it is consistent and true to its mood. With a little schmalzy ending, called 'Silences', I cede you that.

When Lioness opened with 'Sleepwalking Man' I was sold. The ever widening piano line, the violins that do the same, working towards that other point in the song they seem to take forever to reach, the wah wah guitar and all in a ballad of modest proportions. This is no Foreigner ballad. An album that dares to open with a grandeur like 'Sleepwalking Man' can't be bad and this proved to be true. Lioness is Sivert Høyem's best solo effort to date.

You can listen to 'Sleepwalking Man' here: